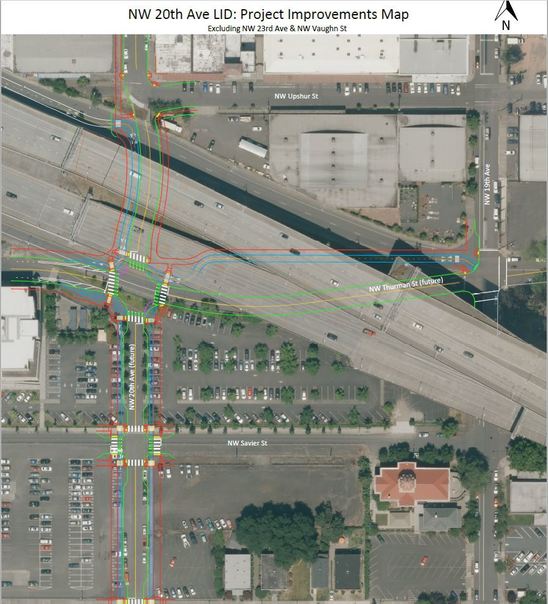 Red, green and blue lines show where NW Thurman St and NW 20th Avenue will be extended and reconnected, underneath the U.S. 30 overpass.

(Oct. 18, 2018) – A contractor for the Portland Bureau of Transportation has started work on a project that will reconnect Northwest Thurman Street underneath U.S. 30, reuniting two sides of Northwest Portland with modern roads and protected bike lanes in a $9.6 million project that is mostly paid for with private funding.

Construction is expected to be completed in summer 2019. A number of detours have been posted for the construction period, and some permanent changes have been installed already.

The NW 20th Avenue LID Project will reconnect the Slabtown neighborhood and Northwest Portland by extending NW 20th Avenue and NW Thurman Street at the normal street grade for the area, underneath the highway overpass. This will create a new intersection, improve traffic flow and bus service, and build a new, more efficient, route for people driving, walking and biking in this growing area.

The project paves the way for build out of the Con-way Master Plan, unlocking more than $500 million in mixed-use housing development for an area comprised mostly of surface parking lots adjacent to St. Patrick’s Catholic Church, the oldest Catholic Church in the Portland area.

"I'm glad to see the Portland Bureau of Transportation collaborating with the private sector to build protected bike lanes, new street connections and housing options," said Commissioner Chloe Eudaly, who oversees PBOT. "The NW 20th Avenue LID Project is a great example of the kind of public-private partnership that will help us manage growth. As we build more housing, it's important that we also build street improvements that make bus service faster, and make it safe and comfortable for people to bike and walk."

Property owners XPO, Esco and Cairn Pacific own a half-dozen city blocks surrounding NW Thurman and 19th Avenue. They are paying a combined $7.6 million for the street improvements, which give the properties more development potential. They worked with PBOT to form a Local Improvement District to organize the funding needed for the improvements.

PBOT will contribute $1 million in system development charges, which are fees paid by developers to help offset the impact of population growth on the transportation system. The Bureau of Environmental Services will invest about $1 million for sewer construction, which will be coordinated with road construction so the roads don't have to be torn up twice.

Corpac Construction won the contract to build the road improvements. The project will have 82 percent participation of MWESB contracting, more than double the city's goal for contracting with minority-owned, women-owned and emerging small businesses.

PBOT's Local Improvement District program works with property owners of all sizes, all across Portland, to build new roads, streetcar lines, drainage improvements and other transportation infrastructure that improve quality of life, the economy and transportation access. 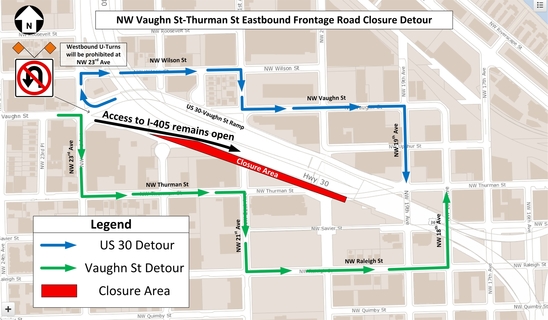 The traveling public is advised to travel cautiously, observe all lane closures and directions by reader boards and flaggers, and use alternate routes if possible.

For more information about the project and plans, or to request a briefing for your community group, contact

The City of Portland Bureau of Transportation is a community partner in shaping a livable city. We plan, build, manage and maintain an effective and safe transportation system that provides people and businesses access and mobility.