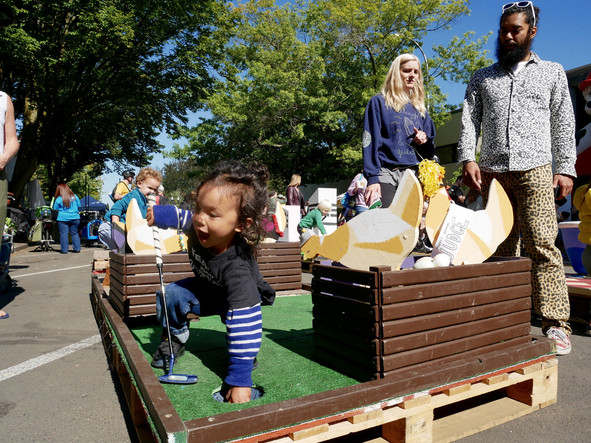 (March 1, 2019) Calling all artists, designers, and creative Portlanders who want to showcase their work at Design Week Portland!

“Pop-Up Place: Innovating the Future of Social Infrastructure” is a design and build competition as part of the Portland in the Streets program. A division of the Portland Bureau of Transportation (PBOT), Portland in the Streets is focused on the ways we can re-imagine our public spaces and right-of-way, from streets to parking spaces, sidewalks to plazas, and much more. Let’s show off Portland’s design community’s world class skills with the exciting new design principals around placemaking!

The design and build competition's goal is to show how using street furniture, large-scale games and modular sculpture can help bring Portlanders out to play in city streets.

PBOT’s signature Portland in the Streets program, Sunday Parkways, has always been a great place to test our imagination. Two years ago, we began setting up a temporary Portland-themed putt-putt course at all of Sunday Parkways events. The minute we would set it up, families would swarm in to play a fun and free game. The course was such a hit that the Willamette Week featured it in their Best of Portland in 2017.

Knowing that putt-putt was so popular, we decided to reach out to Design Week Portland about doing a design competition to create other temporary placemaking elements that spark our community’s imagination. Our goal is to make our street events like Sunday Parkways, block parties, and other special events more fun and engaging.

There are three categories for competition: street furniture, large-scale games, and modular sculpture. Entrants will be on display at Portland City Hall during Design Week, voted on by the public, and winners will receive a beautiful trophy from Felling Design Studio. All entry details can be found online at: https://designportland.org/festival/2019/schedule/pop-up-place-innovating-the-future-of-social-infrastructure

Come by for our opening reception on Monday, April 8 from 6 to 8 p.m. Then, stop in anytime that week up until 2:00 p.m. on Friday, April 12 to play, sit, admire, and vote for your favorite entry! 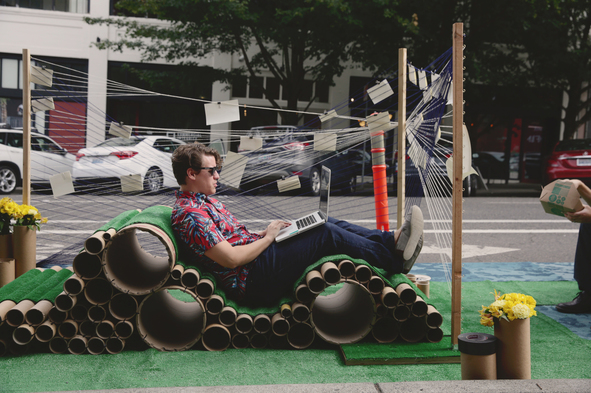 Deadline to register for the competition: