When adopted, the plan will replace the city’s current pedestrian plan, which was last updated in 1998.

(March 5, 2019) After two years of study and collaboration with community partners, the Portland Bureau of Transportation (PBOT) is ready to showcase PedPDX: Portland’s Citywide Pedestrian Plan for public review. The bureau is seeking feedback from Portlanders to help PBOT shape the plan for the better before it goes to City Council in late Spring. The public comment period, which began yesterday, is open until May 3.

With PedPDX, PBOT aims to make walking safer and more comfortable across the city by putting pedestrians at the forefront of its policies and by emphasizing investment in crossing improvements and other pedestrian-focused projects. In the plan, PBOT identifies the key strategies and tools the bureau could use to make Portland a great walking city for everyone. Through PedPDX, PBOT affirms walking as a human right and the most fundamental means of transportation. When adopted, the plan will replace the city’s current pedestrian plan, which was last updated in 1998.

“We’ve heard over and over from people that they do not feel safe walking in Portland. Through PedPDX, Portland is making a public commitment to significantly expanding the number of marked crossings in the city, including a new requirement to mark crossings within 100 feet of all transit stops,” said Transportation Commissioner Chloe Eudaly. “Applying these progressive new crossing spacing guidelines to Portland’s street network will require us to provide approximately 3,500 new crosswalks on busy arterial and collector streets throughout the city.”

“People walking in Portland are ten times more likely than people driving to sustain a serious or fatal injury. As a Vision Zero city, no death on our streets is acceptable. But we have limited resources to address our immense safety needs,” said PBOT Interim Director Chris Warner.  “This plan provides a data-based approach to pedestrian improvements that will make sure we are focused on the greatest needs first, in an equitable way.” 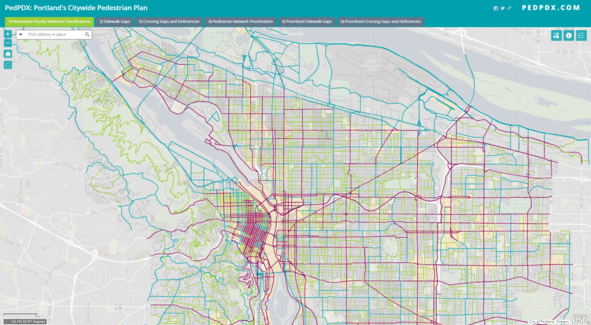 An online survey asks for feedback on PedPDX’s Pedestrian Priority Network, the network of Portland streets and paths that provide important connections for people walking to key transit and land use destinations. It also seeks feedback on the PedPDX Implementation Toolbox, the shared work plan articulating the key actions and tools PBOT will use to implement PedPDX. The full draft plan and a video overview of the PedPDX public process is available online at www.pedpdx.com. 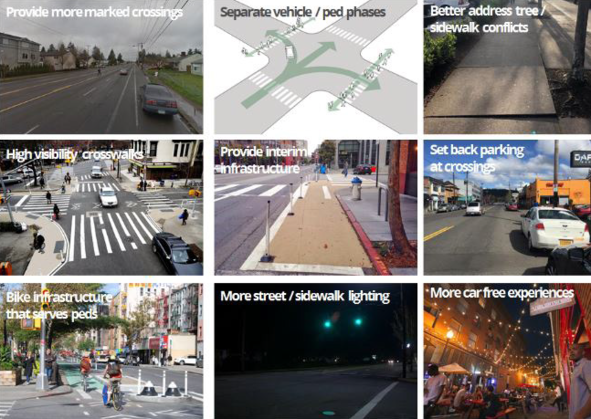 Examples of actions and tools that are presented in the PedPDX Implementation Toolbox.

In addition to the online survey, PBOT has seven “View and Review” parties scheduled during March and April. A video overview of the plan will be shown at the event and participants will have a chance to discuss the plan with bureau staff. The first two parties will be held on:

Complementary childcare will be provided at both events. Additional events dates and times can viewed on the PedPDX website.