PedPDX data analysis and public outreach finds that one’s experience walking in Portland depends a lot on where in the city you live or work, but it also depends upon who you are.

(March 12, 2019) The experience of walking in Portland depends a lot on where in the city you live or work. Portland’s neighborhoods closer to downtown tend to have a fairly well-developed pedestrian network, while Southwest and East Portland have significant gaps in sidewalks and crossings.

However, data and public outreach from our citywide pedestrian plan, known as PedPDX, tells us that the experience of being a pedestrian in Portland also depends on who you are.

Comparing sidewalk presence (left) to PBOT’s Equity Matrix (right) shows that many Portland neighborhoods lacking sidewalks are also areas with higher equity concerns. The orange lines in the map at the left indicate where sidewalks exist in Portland. The darker orange areas in the map on the right show areas of the City where low-income and non-white populations are highest. The maps show that sidewalks are more often missing in neighborhoods with higher equity concerns, particularly in the outer neighborhoods of East Portland.

Because of this disproportionate impact on non-white populations, the PedPDX project team was intent upon making sure that we heard from all Portlanders as part of our planning process.

A key piece of the PedPDX public outreach strategy was a citywide “Walking Priorities Survey,” asking Portlanders to tell us what the biggest barriers to walking in Portland are, and where improvements are most important to community members. This feedback directly influenced the plan’s prioritization of new sidewalks and crossings, as well as the strategies and actions in the PedPDX “Implementation Toolkit.”

However, upon evaluating who we heard from in the survey, it became evident that we were not hearing from all Portlanders. Project staff compared survey responses to the racial and geographic distribution of the city’s population. Out of the 5,405 total respondents to the PedPDX Citywide Walking Priorities Survey, 2 percent identified as African or African-American. However they represent 5.7 percent of Portland’s overall population. 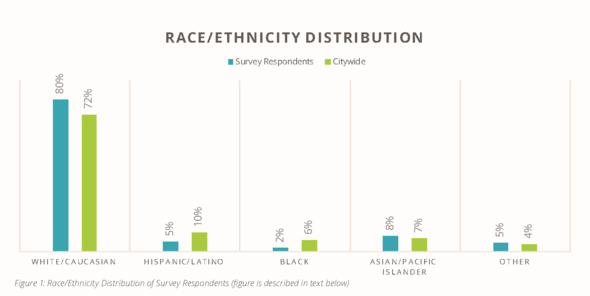 In recognition of the low recorded response rate from African and African-American Portlanders in the Walking Priorities Survey, the project team hosted two focus groups to more intentionally elevate the voice of Black Portlanders in PedPDX. PBOT staff worked with community partners from the Portland African American Leadership Forum (PAALF), Black Parent Initiative (BPI) and Immigrant and Refugee Community Organization (IRCO) Africa House to secure more input from the Black community and to better understand how their walking experience may be different because of their racial and ethnic identities. Facilitators provided a space for black Portlanders to speak candidly about their “Walking While Black” experience in Portland, which the feedback shows is different from other community members.

Focus group participants were asked “what makes walking difficult in Portland?” Like the citywide survey, participants were asked to rank a variety of potential barriers on a scale from 1 to 6, with 1 indicating “not important” and 6 indicating “really important.” The table below shows the responses from Black Portlanders who attended the focus groups compared to data collected from citywide survey.

The most prominent difference was the importance of street lighting to Black Portlanders. Walking While Black focus group participants rated “poor lighting” as the biggest barrier to walking, with an average rating of 5.0, while it was ranked significantly lower than in the citywide survey responses. 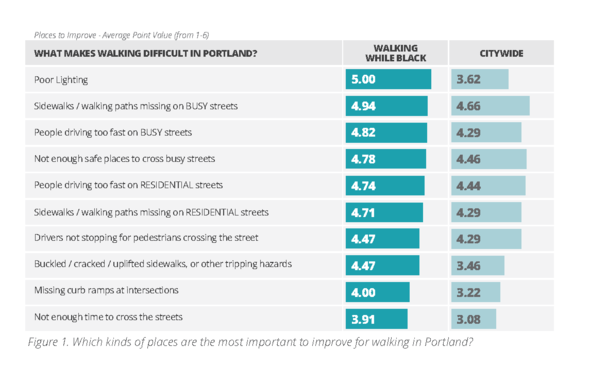 Focus group participants highlighted the impact that dark streets have not only on traffic safety, but on personal safety and security in the public realm. Participants shared that they regularly make travel choices based on how safe and visible the route feels, and often choose travel options that are longer or more expensive as a result.

In addition to answering the two PedPDX survey questions, the facilitators wanted to capture more information about the unique experiences of the Black community to better understand their transportation concerns and barriers. During the focus groups, the 2017 MAX incident was elevated as having a lasting impact on feelings of safety in public spaces and during travel commutes. While participants acknowledged that this was an extreme event, many participants shared experiences they have had on public transit or in public spaces that made them feel exposed and vulnerable to racially-motivated attacks.

Microaggressions in our Streets

As transportation planners and engineers, we often think about safety in terms of traffic safety (i.e., how can we prevent crashes and injuries on our streets?). However, the feedback we heard in our Walking While Black focus groups made us realize that if Portland is to be a great pedestrian city for all, we must also pay attention to community members’ sense of personal safety and security in the public realm.

In response to this feedback, one of PedPDX’s six objectives speaks to this need to protect the public safety and personal security of pedestrians. 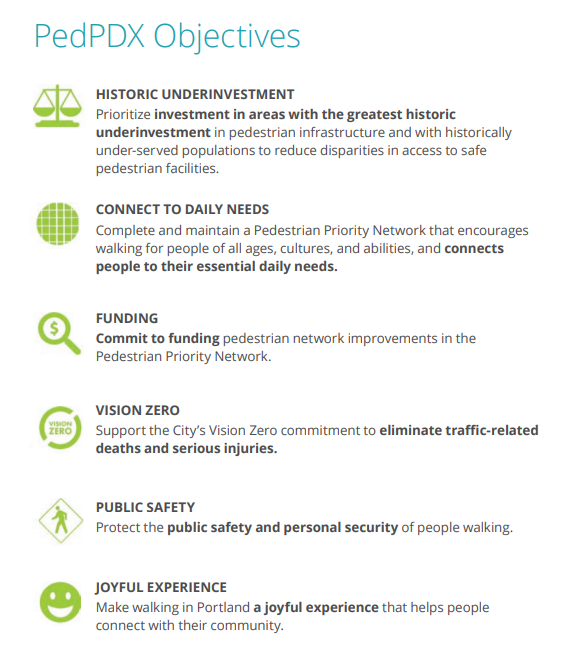 The plan’s Implementation Toolbox includes several strategies and actions intended to help us meet this objective. Action 6.1 introduces new lighting-level guidelines that will increase lighting on public streets as new capital projects and private development goes in. Actions 12.1, 12.2, and 12.3 are intended to address issues of safety and security in the public right-of-way, reinforcing our commitment to equity and eliminating disparate outcomes due to race. In addition to increasing lighting in underserved communities, these actions include partnering with other agencies and city bureaus to advance the well-being and personal security of vulnerable communities, and continuing to research racial bias and driving behavior.

The full Implementation Toolbox and the Walking While Black Focus Group Summary appendix item is available on our project website at www.pedpdx.com.