(March 13, 2019) Since its inception in the summer of 2016, BIKETOWN has attracted more and more Portlanders to biking, while also broadening and diversifying the city’s bicycle culture. The 2018 BIKETOWN Annual Report, released today by the Portland Bureau of Transportation (PBOT), highlights the ever-growing list of accomplishments of the bike-share program, including a 28 percent increase in ridership, a successful service area expansion, and a 220 percent increase in rentals through the Adaptive BIKETOWN program for people with different abilities. 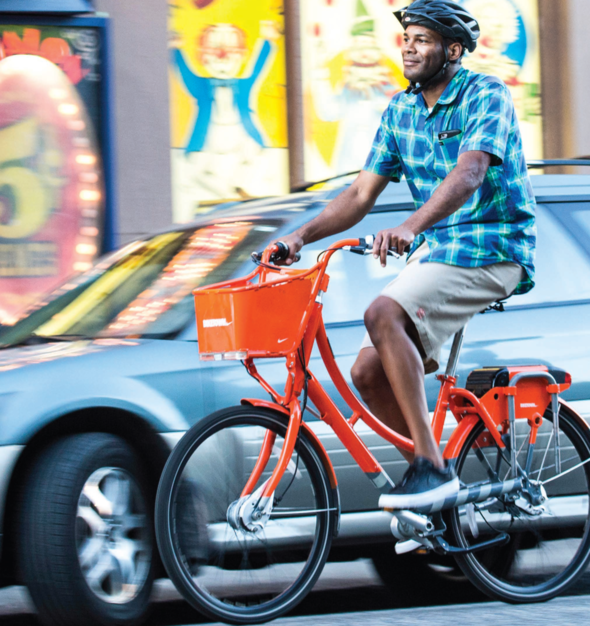 The past year was full of growth for BIKETOWN and its sister-programs, BIKETOWN for All and Adaptive BIKETOWN. This year’s BIKETOWN expansion made it easier and more affordable to explore Portland. PBOT provided an option for lower cost membership, expanded BIKETOWN’s service area and made it easier to park BIKETOWN bikes throughout the city. BIKETOWN lowered its annual membership for unlimited rides by 30 percent to $99. A new pay-as-you-go plan now costs $5 at signup and only 8 cents per minute after that. BIKETOWN also introduced a new $19 month-to-month plan for regular BIKETOWN users who don’t want to commit to an annual membership. On June 1, BIKETOWN introduced two service improvements. BIKETOWN expanded the service to eastside Portland neighborhoods along the 50s Bikeway including Grant Park, Creston-Kenilworth, Laurelhurst, Beaumont-Wilshire, Cully as well as Hollywood where residents have, repeatedly asked for service. As a new benefit, BIKETOWN allowed annual and BIKETOWN for All members to lock to any public bike rack in the service area for free. Additionally, PBOT has designated 45 sets of bike racks across the city as “community corrals” that act the same as the orange BIKETOWN stations where parking is free for BIKETOWN users. 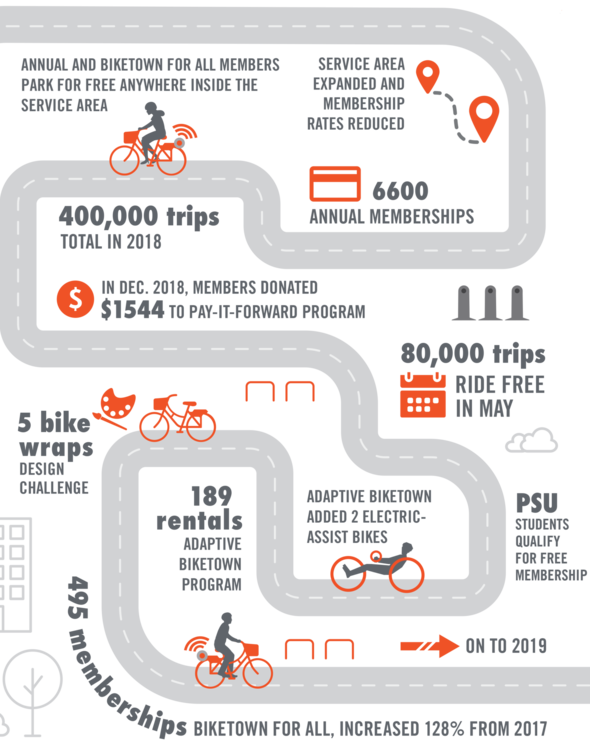 In May 2018, BIKETOWN and PBOT celebrated national bike month with free rides for all. BIKETOWN saw a huge increase in ridership with 79,399 rides for a total of 164,252 miles biked. That was more than double the number of trips ridden in May of 2017! We also set new one-day trip records nine times in May, with a new all-time high of 4,792 trips on Sunday, May 27! This smashed the previous record by over 1,000 trips. Over 14,000 Portlanders and visitors rode BIKETOWN in May, of which 78 percent were first-time BIKETOWN riders.

Adaptive BIKETOWN, Portland’s adaptive bike rental program, is designed to increase biking access for people with disabilities. The program is a partnership with Albertina Kerr Center’s Kerr Bikes and offers short-term rentals of adaptive bicycles such as hand-cycles, tricycles and tandems. The program offers a staffed service to assist in fitting people on the bicycles, a place to store mobility devices, and a location with direct access to Portland’s multiuse trail system. In 2018, Adaptive BIKETOWN added 2 electric-assist trikes and counted 189 rentals. The two most popular adaptive bikes were foot-powered trikes and hand-powered trikes, with 35 percent of riders identifying as first-time adaptive bike riders and 87 percent of riders were TriMet Honored Citizen Passholders. The pilot project originally launched in summer 2017 and will move to a formal program in May 2019.

Looking to the future, BIKETOWN will continue to innovate and increase its service, finding new ways to fill in gaps in the transportation needs of Portlanders. BIKETOWN bike-share service provides flexibility for day-to-day activities, as well as a fun and healthy way to move around Portland. More than a third of surveys showed members would be more likely to use BIKETOWN if electric bikes were added or if the service area was expanded. The 2020 BIKETOWN expansion will encompass PBOT’s Strategic Plan and goals, making sure we keep a focus on equity and provide greater access for those not currently served by bike-share.

BIKETOWN is Portland’s bike share system, launched on July 19, 2016 with 1,000 bikes available to ride from one point to another for a small fee. BIKETOWN is a partnership between the City of Portland’s Portland Bureau of Transportation and Nike, the program’s sole title sponsor. BIKETOWN is operated by Motivate, the world’s leading bike share operator. It uses innovative new “smart bikes” which make it easy to find, rent and park a BIKETOWN bike. BIKETOWN is designed to be affordable and accessible, encouraging even more Portlanders to ride and allowing visitors to experience the city by bike. Portland joins over 60 US cities, including New York, Chicago, Washington DC, San Antonio, Indianapolis, Boise and Austin and 500 cities worldwide that have popular, safe and successful bike share systems. biketownpdx.com

Nike believes in the power of sport to move the world and unleash human potential. As a longtime partner with the City of Portland, BIKETOWN highlights the company’s commitment to make Portland even more active, vibrant and innovative. As the title sponsor of BIKETOWN, Nike designed the innovative visual identity for the program’s standard bike which is the highly identifiable orange that is synonymous with Nike. In addition, Nike oversees the design and branding of the system’s logo, stations and physical presence, as well as a select number of limited-edition bike wrap designs.