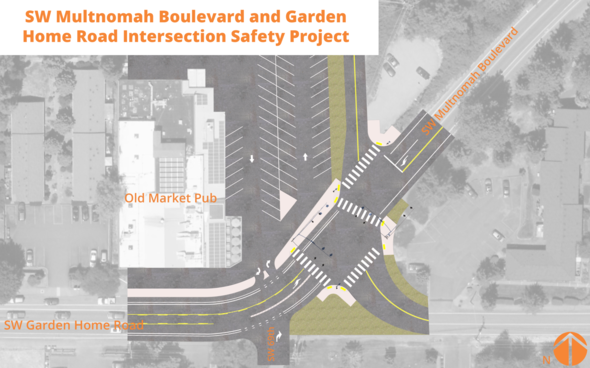 The intersection design was determined after an extensive public engagement process which included an open house, an online survey with over 900 responses, as well as office hours for one-on-one discussions with PBOT’s project manager. Community members were asked to choose between two design options: a roundabout or a traffic signal. While more members of the community supported the roundabout option, there were concerns about the design not creating a clear separation for people walking and biking. There was also overwhelming consensus for PBOT to build this important safety improvement in a timely manner. With a significant cost difference between the roundabout design and a traffic signal – estimates for a roundabout were approximately $6M versus $4M for a signalized intersection – the bureau determined the best course of action was to proceed with the traffic signal option as securing additional funding for the roundabout design could put the project on hold indefinitely.

Thanks to the rich feedback from the community, the bureau has adjusted the signal design in response to suggestions and concerns received during the public comment period. PBOT will create dedicated space and safety for people walking and biking, while maintaining vehicle access to the SW 69th Avenue and The Old Market Pub, by moving the intersection slightly to the east. 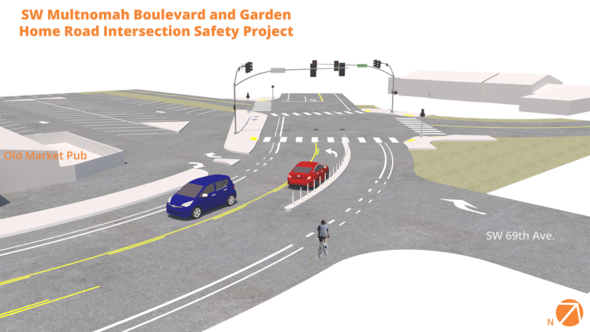 The intersection at SW Multnomah Boulevard and Garden Home Road will feature signalized pedestrian crossings and bike lanes. Specific design details will be provided later this year after PBOT begins the design process.

As the new intersection enters the detailed design and engineering phase, PBOT is already implementing a speed reduction to SW Multnomah Boulevard for safety. In the coming weeks PBOT crews will be changing speed signage on the corridor with speeds on SW Multnomah Boulevard dropping from 35 mph to 30 mph from the SW Barbur Boulevard overcrossing to SW 45th Avenue and from 40 mph to 35 mph from SW 45thAvenue to SW Kelsi Court.

“We are grateful to the Southwest Portland community for their engagement and support of this project and to our partners in Washington County for their contribution as well,” said Chris Warner, Interim Director of the Portland Bureau of Transportation. “We look forward to building these much-needed safety improvements at this busy intersection that serves thousands of people who walk, bike, roll, take transit and drive.”

“Washington County is excited to support the City of Portland in making this project a reality,” said Andrew Singelakis, Director Washington County Department of Land Use and Transportation. “It’s a great example of agencies working together collaboratively to improve our community.”

"On behalf of the Community Participation Organization (CPO3) in the Garden Home, Raleigh Hills and West Slope area of Washington County, I appreciate that the Portland Bureau of Transportation provided an inclusive forum with numerous ways to have this conversation. PBOT listened to a gymnasium full of neighbors that voiced their many concerns and took these into consideration in the overall decision-making process,” said Stan Houseman, Chair of Washington County CPO3 for Garden Home, Raleigh Hills and the West Slope. “Due to the heavy traffic in this area which encompasses nearby SW Oleson and Garden Home Roads, plus knowing that more is coming every year, our main concerns are increased safety and efficient traffic flow for all.”

“The Ashcreek Neighborhood Association truly appreciates the attention PBOT is giving this intersection. While the numbers and data may not reflect the frustration most of our neighbors experience at this intersection, we welcome any change for the better to the current chaotic traffic flow,” said Jerry Rundorff, President of Ashcreek Neighborhood Association.

The project design phase will last approximately one year, with construction of the new signal estimated to begin in summer 2021. Sign up for project updates by visiting the project page at www.portlandoregon.gov/transportation/GH.