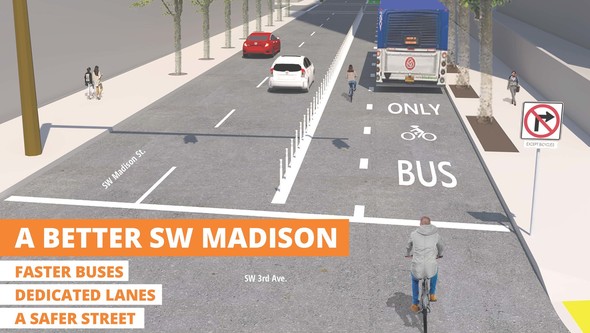 (May 17, 2019) SW Madison will receive a major upgrade thanks to the multi-million dollar Central City in Motion project. Over the weekend, Portland Bureau of Transportation crews will install a new lane dedicated to buses and bicyclists on the street. The result will be quicker bus trips and safer cycling for people on bicycles. The change will also help drivers by making a clear separation between car and bus and bicycle traffic.

The upgrade of SW Madison is the first Central City in Motion project to be implemented, just six months after the plan was passed by Portland City Council. The SW Madison project provides more reliable bus rides and more safety by bicyclists by creating a new bus and bike lane. The new lane provides more space for buses and bikes and reduces potential conflict between buses, cars and bikes. It includes a passing zone to help people on bikes bypass buses at stops and prohibits right turns onto SW 3rd Avenue to remove the risk of right hooks for people walking and biking.

To provide the space for the new bus lane, on-street parking for government vehicles – Portland Police and PBOT Parking Enforcement – was removed.

SW Madison is an important bus route serving five TriMet bus lines: 2, 6, 10, 14, and 30. Combined, these lines provide more than 23,000 trips each day, connecting riders to jobs and services in Downtown Portland from Lents, East Portland, North Portland, Gresham, and Estacada. The Central City in Motion project will implement a total of nine dedicated bus and Business Access and Transit (BAT) lanes, helping employees and others who travel into the Central City to access jobs and other services.

Watch a video by TriMet showing how the new street configuration will help buses move more efficiently through the corridor: 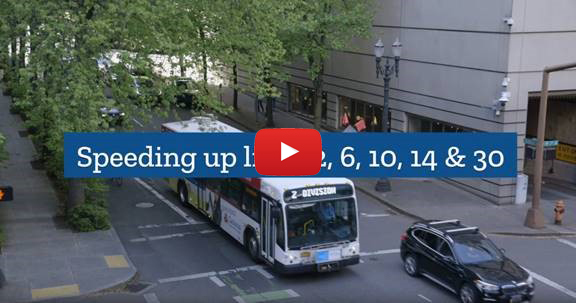 Quicker bus rides are not just coming to downtown. In partnership with TriMet, PBOT is making improvements along numerous bus routes across the entire city by installing new BAT lanes and other features to improve transit efficiency. PBOT is currently awaiting FHWA approval to pilot red painted lanes commonly associated with transit lanes and will be strategically adding the red paint to further distinguish the BAT lane in the future.

“We were serious when we promised a quick implementation of Central City in Motion,” said Transportation Commissioner Chloe Eudaly. “This first project on SW Madison will reverberate in the Central City and beyond. When buses move more efficiently, we all benefit.”

“Metro is pleased to be an early funding partner in the planning and implementation of the Central City in Motion project, which will have regional impacts on bus lines on SW Madison reaching from North Portland to Gresham to Clackamas County,” said Metro Council President Lynn Peterson. “We are excited to see this project move ahead and look forward to more of these types of improvements around the region.”

“PBOT is committed to making the Central City work better for all, that’s why we removed our own on-street vehicle parking to make more space for other travelers,” said Interim Transportation Director Chris Warner. “We hope that these improvements will inspire people to ride the bus and enjoy a faster ride home. When we make transit better, we improve our region’s livability, making it easier and more convenient to reach jobs, schools, appointments and events”

“A single TriMet bus can take more than 60 cars off the road, and the more our service is fast and reliable, the more likely you’ll hop on board instead of sitting in your car,” said Sam Desue, Jr., TriMet Chief Operating Officer. “Working with the City of Portland, we are doing our part to help ease traffic congestion and get everyone moving.”

“While employment in the Central City continues to grow, our streets aren’t getting any wider,” said Ashley Henry, Executive Director of Business for a Better Portland. “This project is an excellent example of a rapid, thoughtful infrastructure improvement that can produce real benefits for area businesses by providing safer and more reliable trips through downtown for employees and customers. We hope PBOT continues to act with urgency in deploying more innovative projects that will help bring the experience of traveling on our streets in line with our community's aspirations."

“It's great to see a small piece of the Central City in Motion Plan implemented,” said Jillian Detweiler, Executive Director at the Street Trust. “This is an important move and The Street Trust wants to see more of these improvements. We talk to lots of people who have given up on transit because it takes too long and is not reliable. We can reverse the trend by getting buses out of traffic now.”

“Providing road space for exclusive transit use is crucial to meeting our regions' climate, health, economic and housing goals,” said Jessie Maran and Alan Kessler, co-founders of the Portland Bus Lane Project.  “We advocated for the dedicated bus lanes proposed in Central City in Motion and are happy to see that, as the new lane on SW Madison shows, PBOT is now implementing this vision.” 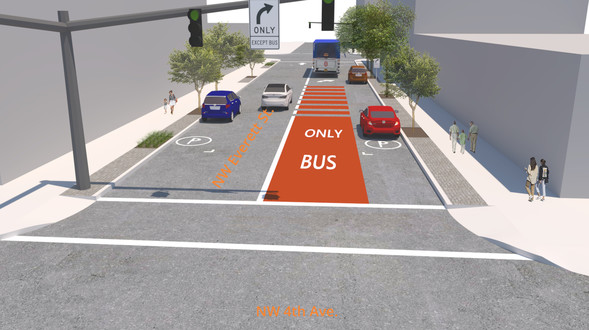 Another Central City in Motion project, a bus lane on NW Everett approaching the Steel Bridge, will be installed in early fall.

A bus lane on NW Everett approaching the Steel Bridge will also be installed in early fall of this year. This will improve transit reliability and access to the Rose Quarter, benefitting Portlanders who ride TriMet lines 1, 12, 19, 54, 56.

Additionally, an eastbound bus lane will be installed on the Burnside Bridge after Multnomah County completes a bridge maintenance project late this year. This new bus lane will benefit the thousands of Portlanders who travel on TriMet lines 12, 19, and 20.

The three bridgehead projects and street reconfigurations were all prioritized for implementation in Central City in Motion.

"At Better Block PDX, we are passionate about bringing people together to innovate on Portland’s streets”, said Ryan Hashagen, a member of the Central City in Motion Working Group and Better Block PDX leader. “It’s so gratifying to see this SW Madison project, first conceived via our collaboration with PSU Planning and Civil Engineering students and PBOT, implemented quickly via Central City in Motion.”

“As a volunteer-led biking and traffic safety advocacy group, BikeLoudPDX is pleased to see PBOT putting the Central City in Motion plan into action,” said Emily Guise, member of the Central City in Motion Working Group and co-chair of BikeLoudPDX . “SW Madison is a critical link to the busy Hawthorne Bridge, and we look forward to seeing quick implementation of the full plan to create a much-needed and safe bike network downtown.”

Learn more about Central City in Motion and sign up for email updates at www.portlandoregon.gov/transportation/ccim.

About Central City in Motion:

Central City in Motion is comprised of 18 key projects, building upon a robust trajectory of plans designed to create a better city: The Comprehensive Plan; Central City 2035 Plan; Transportation System Plan; NE, SW, and SE Quadrant Plans; the 2030 Bicycle Master Plan; the Enhanced Transit Corridors Plan; and the Climate Action Plan. Central City in Motion prioritizes specific transportation projects to be built over the next five years, as well as providing guidance for the Portland Bureau of Transportation’s plans over the next 10 years, recommending a total of $72 million of investments. These projects dedicate more than nine miles of right of way to transit investments, create nearly 100 safer crossings for people walking and rolling, and create or improve nearly 30 miles of low-stress bikeways. Taken together, these improvements will create a more reliable transportation system, both in the Central City and throughout the region. www.portlandoregon.gov/transportation/ccim