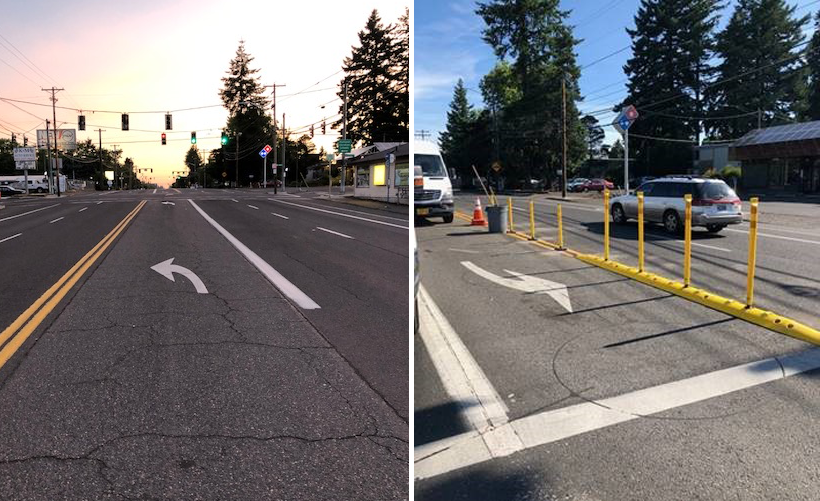 Before and after: A left turn calming "hardened centerline" at SE 122nd and Market Street was installed earlier this month by PBOT crews. Photos by Kirstin Byer, Portland Bureau of Transportation.

(June 20, 2019) One of the trickiest driving maneuvers is getting safer in Portland.

The Portland Bureau of Transportation (PBOT) has begun installing “left turn calming” at 29 intersections. The new treatment uses a combination of materials to slow turning speeds, prevent corner cutting, and increase the visibility of pedestrians.

In addition to slowing turning speeds—an important safety benefit—left turn calming changes the angle at which people driving approach crosswalks. This makes it less likely that a vehicle’s A-pillar blocks a pedestrian from view.

PBOT expects to finish our pilot project installation this summer and will evaluate the results in 2020. The pilot project will be judged successful if the treatment results in slower turning speeds, reduced corner cutting, and reasonable maintenance costs. PBOT may expand left turn calming to more intersections if the pilot is successful.

Funding for the pilot project is provided through Portland’s local sales tax on recreational cannabis. 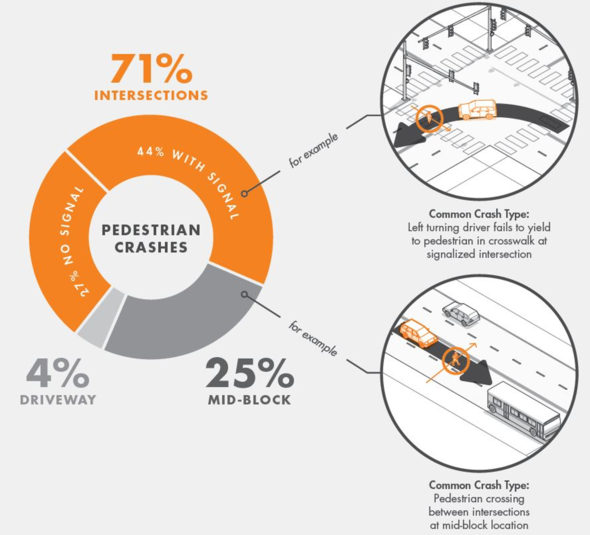 Left turns a danger to pedestrians

Left turns present many safety challenges. Drivers making left turns need to watch for opposing traffic, including people biking and on motorcycles, and for people in the crosswalk.

During rush hour, left turning drivers may feel pressure from those behind them to make a turn quickly, leading to risky maneuvers. The danger becomes greater at night or in bad weather when there is low-visibility.

Our crash data for Portland reflects these challenges. Left turns into pedestrians are one of the most common pedestrian crash types on Portland’s High Crash Network streets. The figure above shows that nearly three-quarters of pedestrian crashes in Portland occur at intersections, usually those with signals.

Cities including New York City and Washington, D.C. have both installed left turn calming. Early results in those cities have been promising, leading PBOT to launch a pilot project to evaluate the treatment on Portland streets.