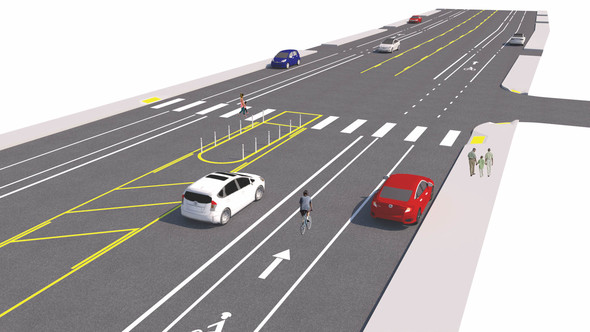 Safer crossings like this example at NE 102nd Avenue and Knott Street will be installed as part of the Phase I improvements.

(July 11, 2019) On Monday, Portland Bureau of Transportation (PBOT) crews will begin work on the NE 102nd Avenue Safety Project. Informed by extensive conversations with neighbors and community stakeholders, the project will add better pedestrian crossings, new bike lanes with more separation between people driving and people biking and make it easier for residents to get to transit stops. The project is funded by the Fixing Our Streets Program.

NE 102nd Avenue is a high crash street for people walking, meaning it is one of Portland’s most dangerous streets for pedestrians. Between 2012-2016 there were 258 total crashes, including nine pedestrian crashes, six bicycle crashes. Since 2014, there have been three fatalities on NE 102nd Avenue. 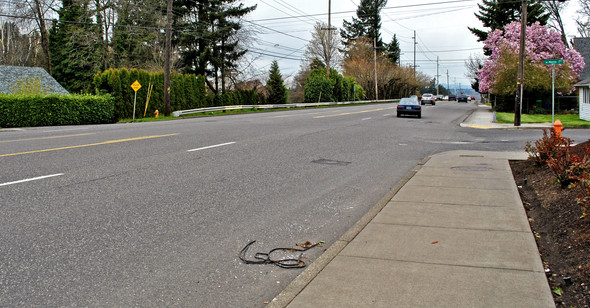 To make the street safer, especially for people walking, PBOT crews will install a center turn lane, a motor vehicle lane in each direction of travel, a parking lane on each side of the street, a buffered bike lane on each side of the street and modifications to the striping on the street. Construction will take approximately two weeks, between 3 a.m. and 3 p.m., with periodic lane closures during that time. During construction, please travel cautiously, observe all lane closures and directions by reader boards and flaggers, and use alternate routes if possible. Learn what you can expect in our work zones and how you can help everyone stay safe by watching this video: https://youtu.be/lx3RkJjkjSE

PBOT will monitor the results of these safety improvements and collect data on safety, vehicle speeds, vehicle and transit delay, and traffic on nearby streets. The bureau will also collect feedback from the community.

If the initial changes show positive results, PBOT will add more safety measures to the street. These could include converting temporary pedestrian refuge islands to permanent concrete installations, adding a new sidewalk at Fremont and 102nd and building new ADA accessible curb ramps along the street, among others.

To inform the planning and design process the project team held two open houses, in April 2018 and January 2019, to collect feedback and answer questions from the community, and present project designs. The project team collected additional feedback via an online survey and coordinated with numerous local organizations, including the City of Maywood Park, Parkrose Heights Neighborhood Association, Parkrose Neighborhood Association, Mount Hood Community College, Parkrose Business Association, and East Portland Chamber of Commerce. Resident support for the project has been largely positive.

The total project budget is $697,000, including $331,000 from Fixing our Streets, with additional funding from Transportation System Development Charges and the Cannabis Tax.