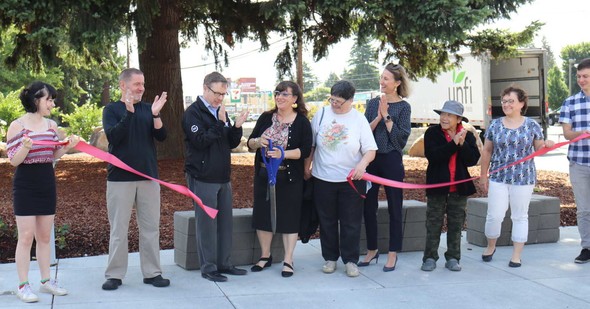 The Halsey-Weidler Streetscape Project has brought to life a vision first outlined in the Opportunity Gateway Concept Plan, approved by city council back in early 2000. The plan envisioned a future for the Regional Center in these terms:

Groups of people can be seen moving in and out of buildings, sitting in outside cafés, jogging on streets, and celebrating community events at the Gateway Station Plaza. Day and night, the area buzzes with activity. Cars still stream through the area, actually in greater numbers than before. Yet ironically it doesn’t feel that way. On-street parking buffers pedestrians from street traffic, new street connections have dispersed cars, traffic lights are coordinated, and accidents have been reduced by 90%. The traffic level feels safe and under control.

The Halsey-Weidler Streetscape Project has now made this vision a reality, through a joint project with Prosper Portland and by coordinating several other PBOT projects in the neighborhood.

Before and after: Waiting for the bus and taking a bike ride along NE Weidler Street at 111th Avenue is a completely different experience following the completion of the Halsey-Weidler Streetscape Project. Photos by Google Streetview (left) and Pierre Haou, Portland Bureau of Transportation (right).

PBOT crews installed new streetlights with their own unique design and made the sidewalks wider to make more room for benches, bicycle racks, trash cans, and other street furniture. And they turned NE 103rd Avenue between NE Halsey and Clackamas streets into a “festival street” that can be closed to traffic for community events and which serves as a bookend to the corridor’s west entrance. 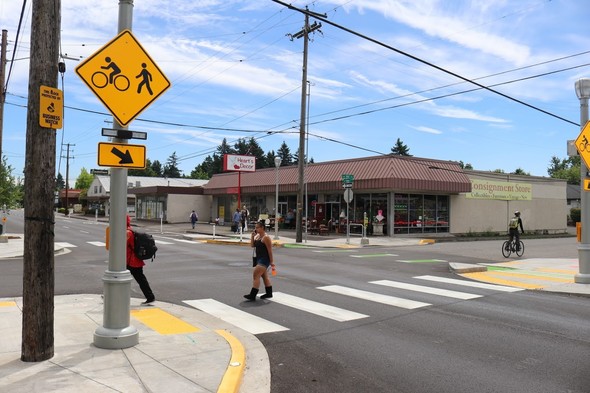 Today, Gateway neighbors gathered to celebrate at the eastern end of the corridor, the second bookend known as the “East Entry Triangle,” a new public plaza bordered by NE 112th Avenue, Halsey and Weidler that formerly sat vacant.

“These streets belong to all of us, and everyone has the right to feel safe whether they are walking, biking, or rolling on them,” said Transportation Commissioner Chloe Eudaly. “I am so pleased that not only does the Halsey Weidler Streetscape Plan bring safety to the forefront with improved pedestrian crossings and reduced speeds, it creates a new public plaza, and will help local businesses in the Gateway District.”

“Get ready, Gateway! This Sunday, over 20,000 people will bike, walk, and roll through this neighborhood for the Outer Northeast Sunday Parkways,” said Transportation Director Chris Warner. “It’s going to be fun to see so many people experience what we already know and love about the Gateway neighborhood – it’s diverse community, it’s charming business district, and – now - it’s fantastic sidewalks, public plazas, bike lanes, and neighborhood greenways.”

“Our children enjoy riding their bikes to the new Gateway Discovery Park and now we can ride safely to Gateway Green as a family, thanks to our new bicycle lanes and greenways,” said Lisa Ortquist, a neighborhood resident and mother of three children aged 10 to 24 who has owned her business, Ortquist & Associates, PC, at NE 112th Avenue and Halsey Street for the past 20 years. “And on days when there’s no school, my kids can now safely walk to get breakfast, ice cream and treats at the neighborhood shops.”

People attending Outer Northeast Portland Sunday Parkways this weekend will get to walk or ride a new 4.8 mile route featuring the WALK with Refugees and Immigrants. The new route will cross the newly improved Halsey-Weidler corridor at NE 106th Avenue at the northeastern entrance to Gateway Discovery Park which opened last summer.

These improvements are just some of the numerous transportation projects underway or coming soon to the Gateway area this year:

Learn more about Fixing Our Streets by using our interactive map of projects at http://map.fixingourstreets.com.

Additional information about transportation projects coming to the Gateway community and East Portland can be found at www.portlandoregon.gov/transportation/east.