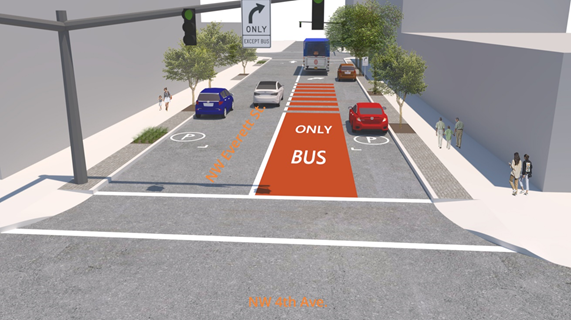 A new Business Access and Transit lane will be installed on NW Everett Street this weekend, from NW Broadway to the Steel Bridge. Rendering by Jake Marshall, Portland Bureau of Transportation.

(August 8, 2019) Portlanders commuting by bus on NW Everett Street from NW Broadway to the Steel Bridge will notice a more efficient commute next week, following the installation of the NW Everett Bus Lane Project this weekend by Portland Bureau of Transportation (PBOT) crews.

The NW Everett Bus Lane project will improve transit reliability and access to the Rose Quarter for thousands of commuters on TriMet bus lines 4, 8, 16, 35, 44 and 77 by creating a Business Access and Transit (BAT) lane approaching the Steel Bridge. BAT lanes are primarily dedicated for transit use but allow some general traffic circulation for turning into driveways or onto intersecting streets. The new bus lane will replace one of the existing travel lanes on NW Everett and run six blocks from NW Broadway to the ramp up onto the Steel Bridge. The project will also close the ramp from southbound Naito to the Steel Bridge to reduce the number of merging conflicts and increase safety for vehicles crossing the bridge.

Transit is one of the most efficient, equitable, and sustainable ways to move people in cities. Improvements like these on NW Everett Street reduce congestion and make riding the bus more convenient and reliable, encouraging more Portlanders to leave their cars at home when traveling into the Central City.

Congestion has been worsening for TriMet buses on the stretch of NW Everett between NW Broadway, resulting in delays that can ripple across the transit network. The average speed of Line 4-Fessenden, for example, has decreased 14% in the last 10 years.

The new Business Access and Transit (BAT) lane on NW Everett will increase transit reliability, speed, and access to the Rose Quarter Transit Center. The project will also address merging conflicts on the ramps to the bridge by closing the southbound Naito ramp to the Steel Bridge, further improving transit commutes out of downtown. Parking will be maintained on both sides of NW Everett Street and people driving will still be able to make right turns to travel south from the BAT lane and access driveways. Traffic modeling predicts the Everett BAT lane will be a meaningful time saver for bus riders, providing up to a 50% time savings for TriMet buses in the project area. 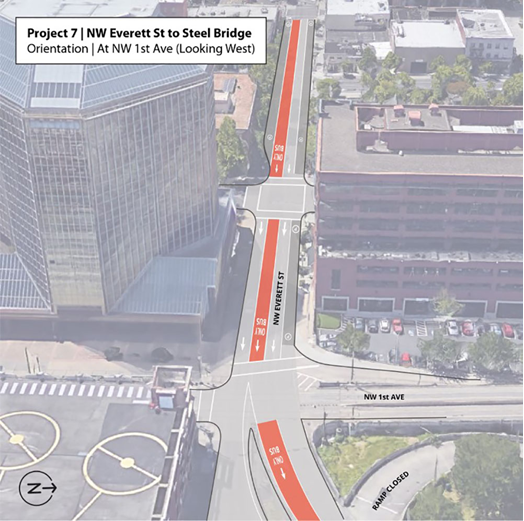 The first BAT lane project from Central City in Motion was installed in May on SW Madison. For the SW Madison Bus and Bike Lane Project, PBOT installed a protected bus and bike lane that allows buses to avoid congestion approaching the Hawthorne Bridge. TriMet’s Line 2, 6, 10 and 14 all traverse the Hawthorne, and similar to buses crossing the Steel Bridge, were experiencing increasing delays in the evening commute. Early data from TriMet shows that in the project area Line 2 buses are now 20% faster in the evening commute, Line 10 buses are 12% faster all day, and buses on the Line 14 saw a 60% increase in reliability, meaning they are now more likely to be on schedule thanks to the BAT lane.

The NW Everett Bus Lane Project and SW Madison Bus and Bike Lane Project, among other Central City in Motion projects, are helping reduce travel time for bus commuters while also helping Portland tackle the climate crisis. More than 40% of local carbon emissions come from transportation, and local transportation emissions have increased in recent years. Switching to public transit is one of the most effective ways people can reduce their individual carbon footprint.

PBOT crews will work on Aug. 10 and 11 between 3 a.m. and 1 p.m. to install the new lane. During construction, one lane on NW Everett Street will remain open for people driving and biking. Sidewalks will remain open for people walking. We ask the public to travel cautiously, observe all lane detours and directions by reader boards and flaggers, and use alternate routes if possible. Learn what you can expect in our work zones and how you can help everyone stay safe by watching this video: https://youtu.be/lx3RkJjkjSE

The project is funded in partnership between TriMet, the City of Portland and Metro’s Enhanced Transit Concepts program. For more information, visit the NW Everett Bus Lane Project webpage or contact the project manager:

Through a strategic partnership and commitment to make transit better, TriMet, PBOT and many others are working together to speed up buses and keep them on time. When transit is safe, efficient and dependable, it’s a better option for getting to work, school, appointments and entertainment. The more people ride, the fewer cars are on the road. As a result, we can all enjoy less traffic congestion, cleaner air and more vibrant, livable neighborhoods. Plan your next trip at trimet.org.