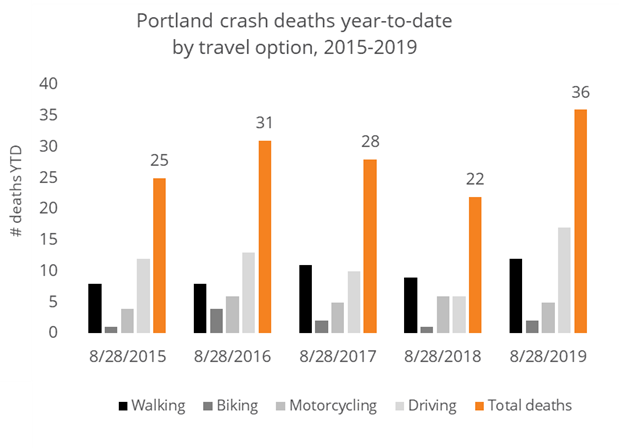 The long weekend is a time to mark the achievements of the labor movement and the unofficial end of summer. We celebrate with barbecues, outdoor recreation, and road trips. But all too often, travel brings tragedy for those involved in traffic crashes.

This year, 36 people have died in crashes on Portland streets—the most deaths at this point in the year since at least 2015. Nearly half of those killed have been pedestrians, increasingly adults ages 65 and over.

Crashes from impaired-driving also have a devastating financial impact. Based on 2010 numbers (the most recent year for which cost data is available), impaired-driving crashes cost the United States $44 billion annually. On average, a DUII could set you back $10,000 in attorney’s fees, fines, court costs, lost time at work, higher insurance rates, car towing, and more.

Help keep yourself and others safe this Labor Day weekend by doing the following:

"Holidays are a particularly dangerous time on the road. As Labor Day approaches, I'd like to remind everyone to look out for others as you travel,” said Portland Bureau of Transportation (PBOT) Director Chris Warner. “It has been a tragic year already for traffic fatalities in Portland. Let's do everything we can to slow this trend. Safety is everyone’s responsibility. We all have a role to play in making our streets safe.”

"You can prevent crashes and deaths from impaired driving," said Tri-County Health Officer Dr. Paul Lewis. "Put someone else in the driver's seat when you have been drinking- text a friend, call a cab, order an Uber or Lyft, but don't drive yourself."

Thank you for supporting the City of Portland’s Vision Zero work to eliminate traffic deaths and serious injuries.