(Sept. 8, 2019) The Portland Bureau of Transportation advises the traveling public that as of 2:30 p.m. today, crews have opened two travel lanes on the North Going Street Bridge, which was closed on Saturday morning after a train crashed into bridge support columns.

The North Going Street Bridge provides the only public street access to Swan Island, a key location for industrial employers, with hundreds of workers and significant freight traffic.

The public is advised to use caution. Expect significant congestion and travel delays in the area. The bridge normally has three travel lanes in each direction.

Structural engineers continue to investigate and assess the bridge damage. There is no timeline for when the other lanes may be reopened. It could take weeks or months to repair the bridge.

The bridge was closed on Saturday morning, after a Union Pacific train derailed and crashed into concrete columns that support the bridge. 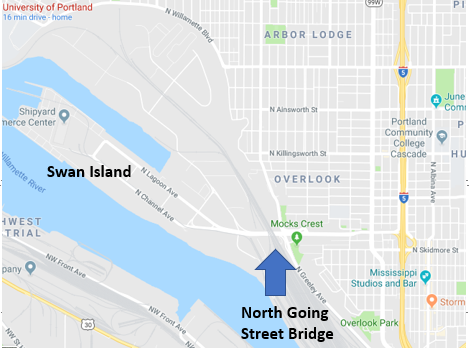 Union Pacific locomotives pulling tank cars crashed into columns that support the bridge. There are no known injuries from the crash.

PBOT structural engineers assessed the scene on Saturday, and again on Sunday morning. After the train wreckage was removed, engineers could access more of the bridge on Sunday for further structural evaluation and damage assessment.

The northern side of the bridge does not appear to be damaged, but damage to other parts of the bridge was found on Sunday to be worse than initially thought. A second support column was damaged, and damage to the bridge deck was also discovered.

Further inspections will take place in coming days, which may include taking core samples and removing parts of the structure and surrounding soils to gain a better understanding of the extent of the damage.