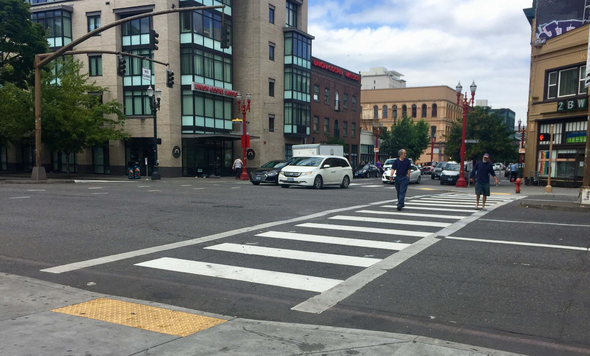 An example of an older style crosswalk that has been restriped with a high-visibility crosswalk at SW Third Avenue and W Burnside Street. Photo by PBOT.

(Oct. 15, 2019) Throughout Portland, the Portland Bureau of Transportation (PBOT) is installing new high-visibility crosswalks to heighten safety and visibility for pedestrians.

With a new directive from the city’s traffic engineer, these high-visibility markings are the new standard for marked crossings in Portland. This is one of the first actions PBOT has taken since Portland City Council adopted a new pedestrian master plan, known as PedPDX, this past June.

What are high-visibility crosswalks and how are they different?

High-visibility crosswalks (sometimes called “continental-style” crosswalks) have thick lines parallel to traffic flow that allow drivers to see the crosswalk from further away. This gives drivers more time to stop safely for pedestrians crossing, or waiting to cross. 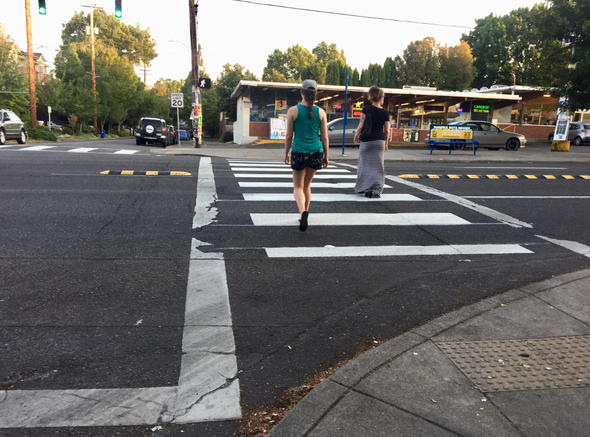 An example of an older style crosswalk that has been restriped with a high-visibility crosswalk at SE 30th Avenue and Hawthorne Boulevard. New left turn calming rubber speed bumps were also added as part of PBOT's Vision Zero left turn calming pilot. Photo by PBOT.

Why the focus on crossings?

The data collected for PedPDX found that over 40% of pedestrian crashes and 30% of severe and fatal crashes citywide occur at intersections with traffic signals. Over a quarter of all crashes involve a turning driver failing to yield when the pedestrian has the right of way.

You can find more information about PedPDX online at www.pedpdx.com.