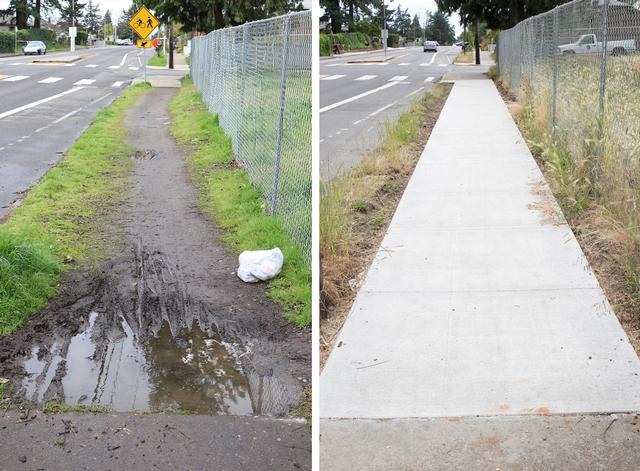 On SE Flavel Street (pictured above), new sidewalks make it safer to walk to the MAX Green Line, the I-205 Multiuse Path, the Springwater Corridor as well as shops and restaurants on 82nd Avenue. (Photo by Portland Bureau of Transportation)

This blog post is the third installment of “A Look Back”, a column that examines Fixing Our Streets projects completed by the Portland Bureau of Transportation (PBOT). This third piece will return to not just one project, but a series of projects that have changed the landscape of accessibility in Portland--Fixing Our Streets sidewalk improvements in East Portland.

(Jan. 8, 2020) In just three short years, the Fixing Our Streets program has added sidewalks on several key routes, making it safer and more convenient for people to walk and access public transit.

These completed sidewalk projects are in East Portland and are focused on areas where there are known gaps in the sidewalk network. Using a data-driven Vision Zero approach to traffic safety, while also connecting people to popular destinations like transit stops, business centers, and schools is a key part of PBOT's long-term vision for Portland. According to the Vision Zero Crash Map, since 2008, the majority of pedestrian deaths and injuries have occurred in East Portland (Click here to view the map).

First identified in the East Portland in Motion plan as having strong community support, these sidewalk projects were made a reality when voters approved Fixing Our Streets in 2016, a 10-cent gas tax to rebuild our roads and make them safer. The projects include:NE 148th Avenue: from Halsey to Glisan Street, SE Flavel Street: from 84th to 92nd avenues, SE 112th Avenue: from Market Street to Powell Boulevard, and NE 102nd Avenue: from Sandy Boulevard to I-84.

On SE Flavel Street, new sidewalks make it safer to walk to the MAX Green Line, the I-205 Multiuse Path, the Springwater Corridor as well as shops and restaurants on 82nd Avenue.

Another location, 102nd Avenue, is one of the most dangerous streets in Portland for pedestrians. The NE 102nd Avenue sidewalk project provided a much-needed safety improvement. PBOT’s Vision Zero Action Plan ranks it in among the top 20 streets where pedestrians are killed or injured.  The sidewalk provides a seamless walking route between Prescott Elementary and the Gateway Transit Center.

Finally, on NE 148th Ave from Halsey to NE Glisan streets, PBOT built a staggering 3000 feet of sidewalk (the equivalent of 15 downtown city blocks)! It filled critical gaps in the East Portland sidewalk network, creating a contiguous sidewalk along this important street. Nine corner ramps and fifteen driveways were also updated during construction to bring them up to current ADA standards. Thanks to Fixing Our Streets funding, Portlanders will have an easier and safer time reaching Halsey HydroPark, Glenfair Elementary and the TriMet bus stops on NE Halsey and Glisan Streets. 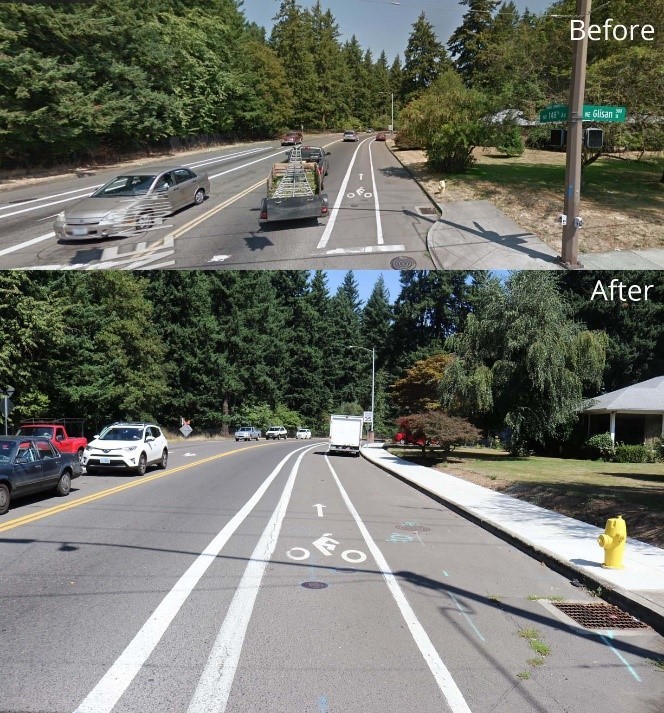 These projects, in total, created a full 2.75 miles of complete sidewalk network in East Portland!