During the week of April 20, the Portland Water Bureau will conduct geotechnical testing in Washington Park. 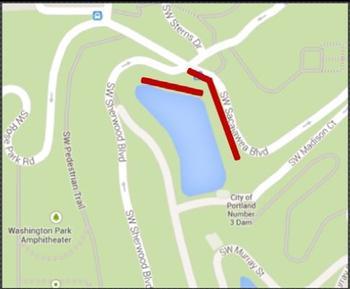 The testing will involve a crew using equipment to drill geotechnical test anchors along SW Sacajawea Blvd. on the east side of Reservoir 3 and along the promenade on the north side of the reservoir. The testing is scheduled to be completed by mid-May.

This work is supporting the design for the Water Bureau’s proposed Washington Park Reservoir Improvements Project to build a new below-ground reservoir in the same general footprint as the existing upper Reservoir 3, with a reflecting pool on top. The lower Reservoir 4 will be disconnected from the public drinking water system. A lowland habitat area/bioswale and a reflecting pool are also proposed in the Reservoir 4 basin.

WHAT THE PUBLIC CAN EXPECT

Park users, including motorists, bicyclists, and pedestrians, are urged to use alternate routes, remember to drive slowly, and exercise caution when traveling in the construction area.

The geotechnical testing will assist Water Bureau engineers in:

Thank you for your patience and cooperation as the Portland Water Bureau works to improve the city’s century-old water system. 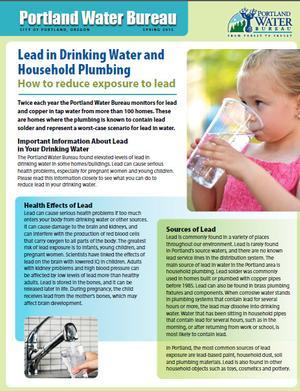 Exposure to lead is a major hazard to infants, young children, and pregnant women. Scientists have linked the effects of lead on the brain with lowered IQ in children, and even low levels of lead can cause permanent brain and kidney damage.

The bad news is that lead poisoning can and does happen in the Portland-area. In a study of older homes in North, Northeast and Southeast Portland, 71% had composite lead dust levels that exceed federal standards.

The good news is that exposure to lead is entirely preventable.

In Portland, the most common source of lead exposure is not from lead in water but from lead-based paint. The Water Bureau’s unique and award-winning Lead Hazard Reduction Program, developed in coordination with state and local public health agencies to comply with the federal Lead and Copper Rule, focuses on all hazards posed by lead, while targeting those most at-risk. The program currently provides resources for hazard reduction in homes, free blood lead testing, and community education and outreach regarding lead hazards.

If your organization has identified a need for lead hazard reduction in your community and have ideas for addressing that need, please consider submitting an application. For projects or programs that are applying to the program for the first time, applications are due to the Lead Hazard Reduction Program by Wednesday, April 29 at 5 p.m.  If you have any questions, please contact the Lead Hazard Reduction Program at 503-823-1547.

The application is available online.

Spring is the perfect time to get your garden prepared for the dry summer months.

Consider these tips from the Portland Water Bureau for improving your water efficiency this year.

Magic of Mulch
Add two (2) inches of mulch to your garden beds to help retain moisture in the soil, suppress weeds, and encourage strong root systems. Some of the best mulches are composted yard debris and other organic materials. Learn more here. 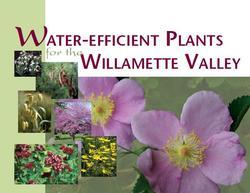 Right Plant, Right Place
Shopping for plants in the spring is a gardener’s joy. With so many beautiful choices, it can be overwhelming. One of the central tenets of water-wise landscaping is choosing the right plant for the right place. To help choose the right plants for your yard such as the examples above, request a copy of the excellent plant guide, Water Efficient Plants for the Willamette Valley. Call 503-823-4527 or e-mail conserve@portlandoregon.gov.

Planting and Maintaining Your Lawn
Nearly 30 percent of the water used in a single-family residence is used in the summer to water lawns. As a result, the Portland metropolitan area can use two to three times as much water in the summer months than in the winter months. Learn how to properly install and maintain your lawn, and keep it green and healthy with the appropriate amount of resources — fertilizer, water, and your time.

In order to comply with federal and state mandates, and ensure a healthy, resilient, and secure water system, the Portland Water Bureau is moving forward with a project to update the Washington Park reservoir site.

In December 2014, the Water Bureau submitted the first of two Land Use Review (LUR) applications (Type IV) to the City of Portland Bureau of Development Services (BDS) for the proposed Washington Park Reservoir Improvements Project.

The initial Type IV LUR application proposes the removal of the Weir Building (screen house), portions of lower Reservoir 4’s basin, and upper Reservoir 3’s basin in Washington Park. The gatehouses, dams, and other historic features will be protected and restored.

On February 9, BDS deemed the Type IV LUR application complete and issued a Request for Response, officially opening the public comment period and setting the dates for the Historic Landmarks Commission meeting (March 30) and the City Council Hearing (April 23).

During the public meeting, BDS presented the Staff Report and Recommendation, the Water Bureau discussed the project, and members of the public offered testimony. The Commission voted 3 to 1 in support of the initial LUR application and will forward their recommendation to the City Council.

City Council Hearing
A City Council hearing will be held on Thursday, April 23 at 2 p.m. in City Hall Council Chambers at 1221 SW 4th Avenue, Portland, Oregon. During the hearing, members of the public will be invited to offer testimony.

Please reference Land Use Review number LU 14-249689 in any communications. Access a courtesy copy of the initial LUR application on the Water Bureau’s project webpage at http://www.portlandoregon.gov/water/wpreservoirs/LUR1.

Project Details
The Water Bureau’s Washington Park Reservoir Improvements Project proposes to build a new below-ground reservoir in the same general footprint as the existing upper Reservoir 3, with a reflecting pool on top.

This past March marks the third anniversary of the Bull Run Treatment Variance (BRTV).

Granted by the Oregon Health Authority in 2012, the Variance allows the Portland Water Bureau to operate the Bull Run supply without treatment for Cryptosporidium, due to the protected nature of the watershed. 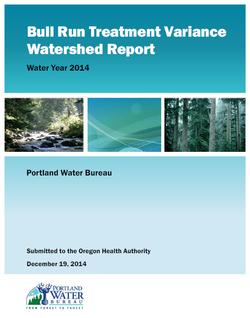 The Water Bureau is also required to demonstrate protection of the watershed and water supply. To that end, the bureau:

In addition to meeting these ongoing requirements, the Water Bureau met several milestones in 2014 including:

And finally, the most important statistics for 2014: