In order to comply with federal and state mandates, and ensure a healthy, resilient, and secure water system, the Portland Water Bureau is moving forward with a project to update the Washington Park reservoir site in southwest Portland.

Members of the public are welcome to attend. However, no public testimony will be heard as the public comment and testimony period closed on May 7. Opportunity for public input included the Historic Landmarks Commission meeting in March 2015 and the City Council hearing in April 2015.

The initial Type IV LUR application proposes the removal of the Weir Building (screen house), portions of lower Reservoir 4’s basin, and upper Reservoir 3’s basin in Washington Park. The gatehouses, dams, and other historic features will be protected and restored. 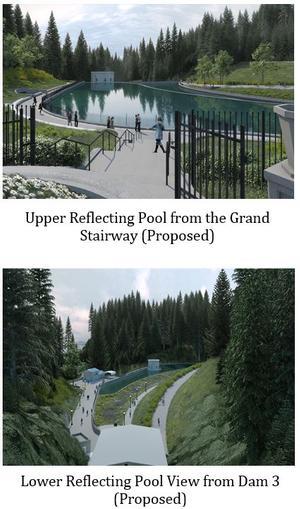 Proposed Project
The Water Bureau’s Washington Park Reservoir Improvements Project proposes to build a new below-ground reservoir in the same general footprint as the existing upper Reservoir 3, with a reflecting pool on top.

The lower Reservoir 4 will be disconnected from the public drinking water system and a lowland habitat area/bioswale and a reflecting pool will be constructed in the basin. Much of the Reservoir 4 basin and the slope to the west are needed to provide landslide abatement; the slope will be restored to its pre-reservoir condition.

The new below-ground reservoir in the place of Reservoir 3 will be constructed so that it is outside of the moving edge of the landslide, which will help protect it from damage.

Background
In December 2014, the Water Bureau submitted the first (Type IV) of three LUR applications to the City of Portland Bureau of Development Services (BDS) for the proposed Washington Park Reservoir Project.

On February 9, BDS deemed the Type IV LUR application complete, issued a Request for Response, and officially opened the public comment period and set the dates for the Historic Landmarks Commission meeting and the first City Council Hearing.

On March 30, a public meeting was held before the Historic Landmarks Commission to review the Type IV LUR application. During the public meeting, BDS presented the Staff Report and Recommendation, the Water Bureau discussed the project, and members of the public offered testimony. The Commission voted 3 to 1 in support of the initial LUR application and forwarded their recommendation to the City Council.

On April 23, the first of three City Council hearings was held. During the hearing, members of the public had the opportunity to offer testimony. At the hearing’s conclusion, the City Council agreed to allow the record to remain open through May 7.

On May 13, City Council held a second hearing for the purpose of deliberations on the application. The record had previously been closed, and no testimony was accepted. After deliberating, Mayor Charlie Hales and the City Council gave unanimous tentative approval to the Type IV LUR application.

The next step will be a final decision by the Mayor and Council at a hearing on Wednesday, June 10.

The second LUR application process will also include public comment periods and public hearings to ensure public notification and the opportunity to comment before a final land use decision is rendered.

Before work permits are issued or construction begins, all three LUR applications must be approved.

The LUR applications are a result of a robust public involvement process that included multiple public open houses, nine Community Sounding Board meetings that guided design for the required visible features of a new reservoir in Washington Park, five public meetings before the Historic Landmarks Commission, and three City Council hearings.

Additional Information & Contacts
For detailed project information, visit the project webpage or contact Water Bureau Public Information staff at 503-823-3028 or by e-mail. Visit the Bureau of Development Services’ website or call 503-823-7300 for more information on the land use review application process. 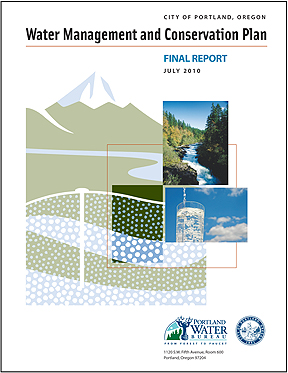 On May 4, 2014, the Portland Water Bureau submitted its Five-Year Progress Report to the Oregon Water Resources Department (WRD).

The Progress Report describes the bureau’s progress in implementing required conservation measures and meeting benchmarks contained in the bureau’s 10-year Water Management and Conservation Plan (WMCP) which was approved in May 2010. The bureau is required to have an approved WMCP as part its groundwater right permit extensions.

As the steward of the city’s 120-year old water system, the Portland Water Bureau developed and recommended to the Portland City Council and our customers a budget that allows it to continue to meet its mission of providing clean, safe, and affordable drinking water to our customers.

A Budget Advisory Committee (BAC) -- comprised of representatives of key stakeholders that included members of the community and labor representatives -- worked alongside Water Bureau Administrator David Shaff and Group directors and managers to develop the consensus FY 2015-16 budget per City of Portland guidelines. Representatives of the Portland Utility Review Board (PURB) and the Citizens‘ Utility Board (CUB) also participated in the process along with members of the public.

Public Involvement
Each year, members of the public are invited to be engaged and provide feedback in the budget development process both for the city and for individual bureaus. For the FY 2015-16 budget, public participation opportunities included:

Next Steps
The City Council is scheduled to adopt the FY 2015-16 Budget on Thursday, June 18. For additional information on budget events, visit the City Budget Office’s webpage. 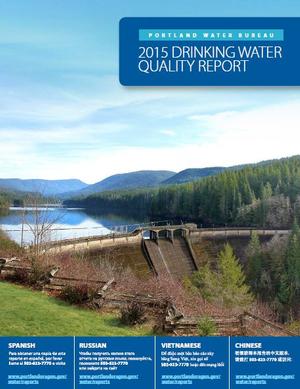 The Portland Water Bureau has posted its annual water quality report online. The federally-required report outlines how, from forest to faucet, Portland is continuing to deliver clean and safe drinking water for the city of Portland.

“I hope everyone takes a moment to read the report online. This information is extremely important,” said Water Bureau Administrator David Shaff. “Delivering high quality drinking water to our customers is the Water Bureau’s top priority. This report details what goes into delivering water to your tap.”

The Portland Water Bureau is mailing a postcard this week to inform every customer about the availability of the report online. Customers are able to request a paper copy, either online or by phone. The report is available in large font for the visually impaired. Russian, Vietnamese, Chinese and Spanish and can be found online or by calling the Portland Water Bureau Water Line at 503-823-7525.

The report is available online at: www.portlandoregon.gov/water/waterqualityreport.

The sidewalk will be closed to pedestrians, and the bike and motor vehicle lanes will shift to the west on North Interstate Avenue between North Tillamook Street and the intersection of North Interstate and North Larabee avenues. These traffic controls will begin June 8, 2015 and will be in place for two-three weeks. Hours of operation are 7 am to 3 pm, Monday-Saturday.

A contractor for the Portland Water Bureau will be removing the brick face of the bureau’s building at 1900 North Interstate. To protect the public, a construction barrier will be moved close to the sidewalk curb and the bike and motor vehicle lanes will be shifted to the west to make room for both types of vehicles.

Motorists and bicyclists are urged to use alternate routes, remember to drive slowly, and exercise caution when traveling in the construction area.

Project information can be found online at www.portlandoregon.gov/water/interstate.