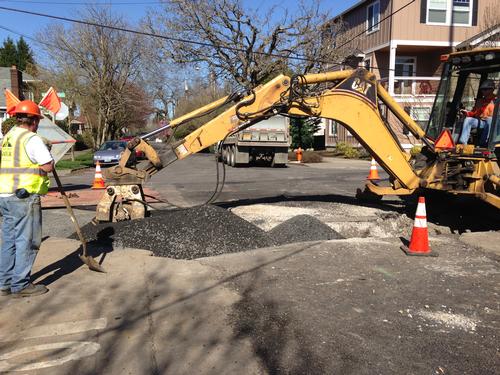 For many public and private utility workers in Portland, their ‘office’ is actually a construction work zone on a city street. To keep these workers and others safe, the Portland Water Bureau encourages the public to drive carefully through all work areas.

Caution in construction zones is vital for the safety of City of Portland workers as well as for drivers, bicyclists and pedestrians. To stay safe, the Water Bureau has these important tips:

Remember, everyone plays a role in maintaining a safe work zone during utility street construction.

On schedule and in just over two years, the Portland Water Bureau and Hoffman Construction Company crews have completed construction of the 25-million gallon underground reservoir, overflow basin, and an intricate network of underground piping, multiple vaults, and valve structures at Kelly Butte in southeast Portland.

Functional testing of the new reservoir and valves will be complete within the next few months.

Crews backfilling around the reservoir

Crews are now working to backfill around and on top of the underground reservoir with onsite earthwork. During February and March, the reservoir and piping are scheduled to undergo disinfection.

A year ago, crews removed non-native and invasive plants, dead and diseased trees, and unfortunately a few healthy trees to accommodate the footprint for the new underground reservoir. On the east and north side of the butte, the tree canopy that is dominated by Douglas-Fir and Big Leaf Maple trees was largely left intact.

Within the next couple months, the Water Bureau and Hoffman Construction crews will undertake a comprehensive re-vegetation management project on the butte. 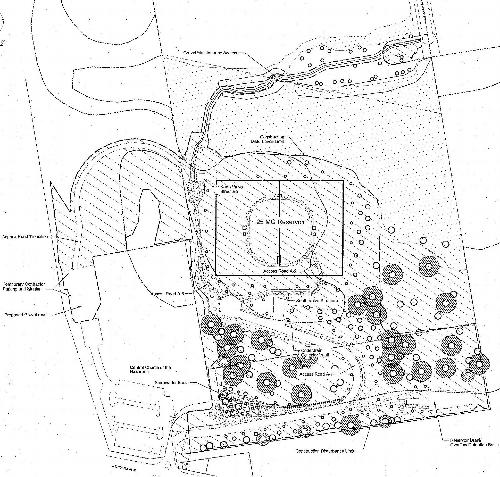 An important part of the approved land use review application, the project includes the strategic planting of more than 1,660 trees and 7,250 shrubs across the entire site.

Planting areas will be maintained so that the newly planted trees and clusters of shrubs are free to grow.

To help prevent and mitigate soil erosion, especially on the hillside slope, crews seeded ground cover plants which have already begun sprouting across the butte.

The entire project is slated for completion by the end of 2015.

The Kelly Butte Reservoir will serve Portland's east side and be a stopover to supply water to the Washington Park reservoir and southwest Portland area water storage tanks. 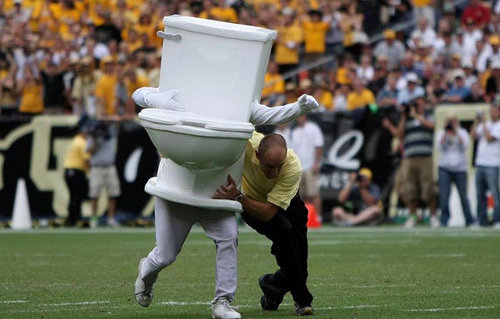 In case you haven’t heard, there is a big event this weekend – the superbowl.  Whether you tune in or not, there’s one bowl we should all keep our eyes on: the toilet bowl.

The most common place to find a leak in a home or business is the toilet. While it might seem like a minor problem, toilets can waste lots of water over time, affecting the environment and your pocketbook.

Checking for toilet leaks is easy. Use these “Three Rs” to tackle your toilet and start saving water and money inside your home:

So go ahead, tackle that leaking toilet this weekend!

The City of Portland is recruiting for a Water Resources Program Specialist in the Portland Water Bureau’s Resource Protection and Planning Group. The Water Resource Program Specialist will assist multiple program managers within the Source Protection section, which is responsible for protecting drinking water quality in the Bull Run Watershed and the Columbia South Shore Well Field.

For additional information and to apply for the Water Resource Program Specialist position, START HERE. 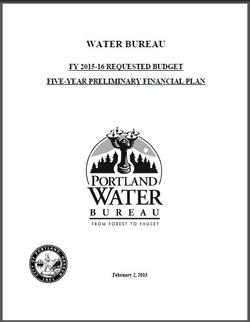 As the steward of the city’s 120-year old water system, the bureau works to develop and recommend to the Portland City Council and our customers a budget that allows it to continue to meet its mission of providing clean, safe, and affordable drinking water to our customers.

A Budget Advisory Committee (BAC) -- comprised of representatives of key stakeholders that included members of the community and labor representatives worked alongside Water Bureau Administrator David Shaff and Group directors and managers to develop the annual budget per City of Portland guidelines. Representatives of the Portland Utility Review Board (PURB) and the Citizens‘ Utility Board (CUB) also participated in the process along with members of the public.

Together, the BAC members and bureau staff reviewed, discussed, deliberated, and worked to develop a consensus budget. Their challenge was to propose a budget that:

To access the Water Bureau’s Requested Budget, including an overview from Commissioner Nick Fish, visit http://www.portlandoregon.gov/water/requestedbudget15-16.