Maintaining and continuously improving habitat for birds and other wildlife within the nature park while making trails easily accessible to park users is of key importance for the Portland Parks & Recreation and the Water Bureau. 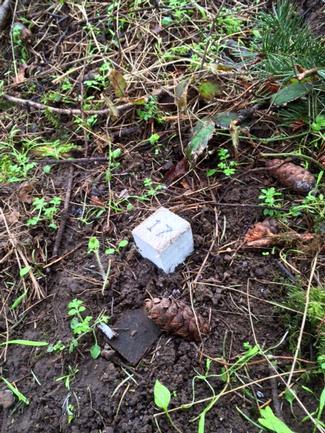 One way park wildlife, specifically the bird population, is researched and monitored in the nature park is through avian or bird surveys. During field visits, volunteers trained by Portland Parks & Recreation collect information used to study:

Pre-placed wooden markers, such as the one to the right, help direct volunteers where to stand, observe, and count birds for the survey. The markers are located throughout the park, in the meadows, forested areas, and close to trail edges.

The markers near the trail edge are in the process of being leveled with the ground for safety.

Reminder to Be Safe
Parks users are asked to leave the markers in their locations as they are integral to consistency for the Bird Study and other data collection throughout the year. Users are also asked to stay on the designated trail system for their safety and equine trail riders and mountain bikers encouraged to ride single file.

The Portland Water Bureau and Parks & Recreation appreciate the public’s help in preserving and protecting the nature parks and all its inhabitants.

Water levels in Reservoir 1 at Mt. Tabor Park will fluctuate this spring and early summer as the Portland Water Bureau conducts maintenance and repair work to the water distribution system.

Park users will see Reservoir 1 empty for almost all of March while it undergoes its semi-annual cleaning, maintenance, and repair work. Draining of Reservoir 1 began Friday February 27.

Additionally, the bureau is also conducting scheduled maintenance work in East Portland over the next few months that will impact water levels in Reservoir 1 in Mt. Tabor Park.

That work consists of installing new valves and controls in three vaults. These vaults house the pipes, valves, and controls that make up the ‘intertie’—a system which permits the passage of water from each of the three large conduits to the water distribution system itself. Work can only be performed on one vault at a time, as the water conduit must be shut down to conduct the work. As water from the conduits flow directly to Mt. Tabor Reservoir 1, it will be impacted by the vault work.

When the water conduit is shut down, the water from the large conduits must be drained. Reservoir 1 will serve as the ‘holding tank’ for this water, where it will then be drained to the combined sewer system. Once the repair work is done for each conduit, they will then be disinfected and that water will be flushed once again to Reservoir 1, before it is drained into the combined sewer system.

For almost all of March, the last two weeks of April, and the last two weeks of May, the reservoir will be emptied and filled in order to flush each of the three conduits after the valve and control work is done. Each conduit flushing cycle will take about two weeks. Water quality or service to local residents will not be affected by the maintenance work. 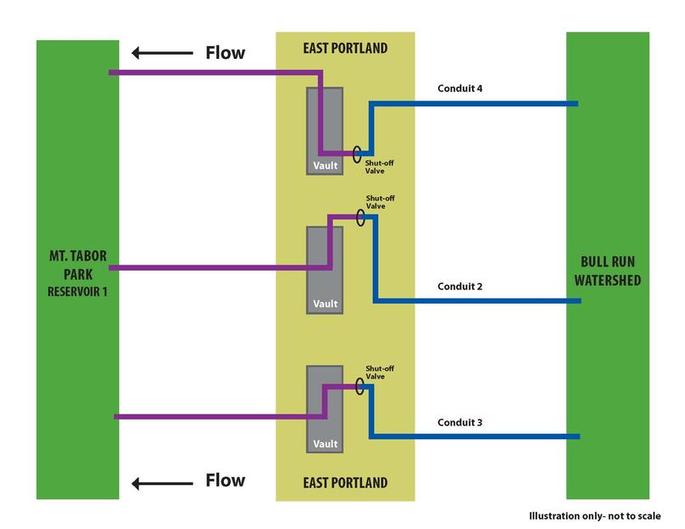 Work can only be performed on one conduit at a time. Once the shut-off valve is engaged, the water in the isolated part of the pipe (purple pipe) must be drained into the reservoir, where it will be drained into the sewer system. The amount of water drained can be approximately 2-3 million gallons. 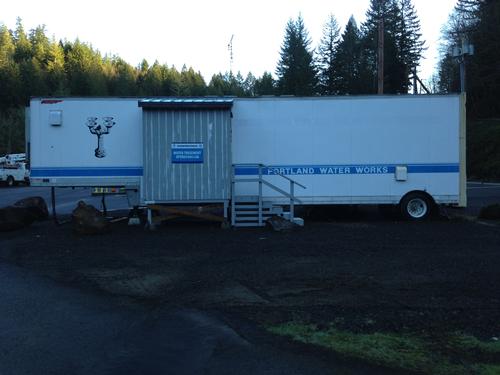 The Portland Water Bureau's Headworks lab trailer was recently relocated and improved in the Bull Run Watershed. The lab is used several times a day by Headworks water treatment operator IIs to perform water quality analyses for process control and regulatory compliance.  The trailer itself was moved from an out-of-the-way corner of the parking area to a location front-and-center of the Headworks campus.

With the old adage, “you only get one chance to make a first impression,”  in mind, the treatment staff thought it would be a great idea to dress up the trailer to ensure it made a good first impression to visitors. 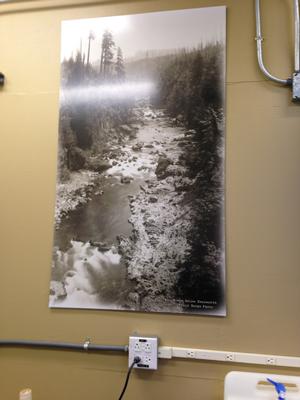 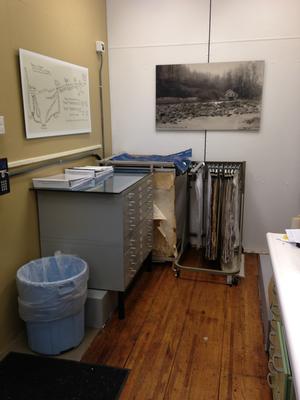 Exterior entryways constructed from repurposed materials were added along with high efficiency LED lighting.  A new sign using the latest Water Bureau logo was added and modifications were made to the existing painted banners. The interior walls were painted and area lights were added to modernize and brighten up the structure. An unused end of the trailer, known for being a catch-all for clutter, was converted into a blue print and drawing nook with storage racks and viewing surfaces. To add a little extra polish and pizazz to the interior of the trailer, a decorating idea was borrowed from the Bear Creek House. Several historic drawings of the infrastructure and pictures of the river and Headworks were blown up, mounted, and hung on the walls to provide a visual historic perspective on the development of the Bull Run Headworks Facility. 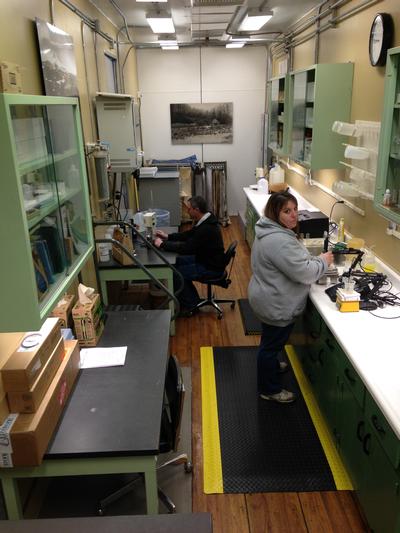 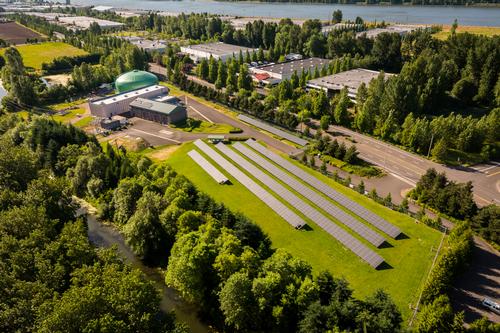 The City of Portland and Multnomah County have released the 2015 draft Climate Action Plan with a goal to reduce carbon emissions by 40 percent by 2030, and 80 percent by 2050.

The Portland Water Bureau participated in developing the plan by identifying actions that will reduce the bureau’s contribution to climate change, such as improving the efficiency of water pumps and other energy-intensive operations. The bureau is also committed to increasing its understanding and management of climate risks to the Bull Run watershed and built infrastructure and assets.

Visit www.portlandoregon.gov/bps/climate to find additional information and download a copy of the draft plan. Comments from the public will be accepted through April 10, 2015.

You can also attend a 2015 Climate Action Plan open house event at the following locations to find out more:

If you have questions about Portland Water Bureau actions listed in this plan, please contact Kavita Heyn, Climate Science & Sustainability Coordinator, at kavita.heyn@portlandoregon.gov or 503-823-4724.

Scheduled for Thursday, March 12, the City of Portland will hold the second annual City Utility Rate Review for the public to talk about drinking water and sewer-storm water rates.

The City Utility Rate Review is sponsored by the City Budget Office.

City Commissioner Nick Fish and management staff from both the Portland Water Bureau and the Bureau of Environmental Services will be on hand to answer questions.

The rate review will be held from 6:30 p.m. to 8:30 p.m. in the first floor Banquet Room at the Montgomery Park Building, located at 2701 Northwest Vaughn Street.

The Portland Water Bureau invites our customers to attend to learn more about the bureau’s operating budget, capital improvement program and projects, and the challenges of maintaining an aging system and keeping rates affordable.