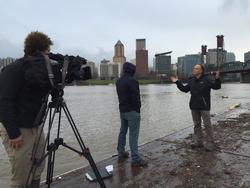 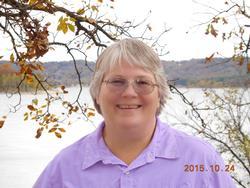 Hosted by Dave Miller, the conversation focused on how the Water Bureau is strengthening the water system’s seismic resilience, and ensuring we can continue to deliver high-quality, safe, and reliable drinking water at all times – even after The Big One.

Teresa discussed several critical construction projects the Water Bureau has in the pipeline, including burying a large water conduit deep under the Willamette River to ensure an uninterrupted water supply to the west side of the city. She also described how we’re replacing 100-year-old pipes throughout the city and working to strengthen in-town reservoirs, which provide vital storage for drinking water — as well as the water firefighters depend on.

While the Water Bureau can’t predict when a disaster will strike, we want the public to know that when it does, we are working hard to be ready and able to provide high-quality, safe and reliable drinking water to nearly a million people — just like we do every day.

“We’ve been working on projects to get ready for the earthquake for about 20 years. We’re working on a series of projects to replace aging infrastructure to make them so that they’re more able to deal with a seismic event right now,” Teresa said.

Take a listen to the Talk Out Load conversation here: https://soundcloud.com/thinkoutloudopb/earthquake-proofing-portlands

Producer and host Ed Jahn filmed inside the Bull Run Watershed for a story about the Water Bureau’s work on earthquake resiliency. The segment will highlight several of the Water Bureau’s projects that prepare our city for The Big One.

Drip, drip, drip…  Is that the leaky faucet again? Leaks mean water and money down the drain, but it can be intimidating to know where to start to fix the problem. Maybe it’s time to attend a Fix it Fair!

Fix-It Fairs are free events designed to help you create a healthy home while saving you money and connecting you to helpful resources in your community. At the Fix-It Fair you will find workshops, ongoing exhibits, free professional childcare, free lunch, great giveaways, and hourly door prizes! Topics include weatherizing your home, water and energy savings, food and nutrition tips, gardening information, home repair and more! And there’s no need to register – just show up!

While at the Fix-It Fair, you can attend a free workshop by the Portland Water Bureau to learn where your drinking water comes from and ways to use it resourcefully.  We’ll also demonstrate some easy home repairs and modifications you can make to save water. Free water conservation kits* will be available on site. Mark your calendar for the February Fair:

The Portland Water Bureau will be installing a new water main in SE 82nd Avenue between SE Morrison Street and SE Yamhill Street on Wednesday, Feb. 24, from 9 a.m. until 1 p.m. Traffic controls and flaggers will be in place directing vehicles through the construction site.

Drivers traveling both northbound and southbound on SE 82nd Avenue (OR213) can expect slowing and minor delays as lanes will need to be adjusted to accommodate construction equipment and vehicles.

Travelers are urged to drive slowly in the area under construction and to obey all flaggers and traffic control signs. 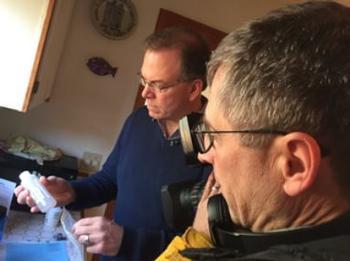 This morning, Rachel Rafanelli from KGW joined Nick at his home to test his water for lead.

In Portland, we are fortunate to have some of the best drinking water in the world, thanks to the Bull Run Watershed. Because it’s so high in quality, we only have to minimally treat our water.

The main source of lead in our water comes from household plumbing. Lead solder was commonly used in homes built or plumbed with copper pipes between 1970 to 1985.

The Water Bureau provides free lead-in-water test kits that are available to all customers, which are tested in the Bureau’s Water Quality Laboratory. The Bureau also has a great, simple resource guide to help reduce lead exposure in your home.

Contact the LeadLine for a free lead-in-water test at (503) 988.4000 or order one online. And check out the Water Bureau’s website for easy steps to decrease lead exposure.

A Portland Water Bureau water main installation project will impact traffic on SW Macadam Avenue near the intersection of SW Nevada Street the evenings of February 29-March 4. To minimize traffic disruptions during busy daytime traffic, work will begin each night at 8 p.m. and be completed by 5 a.m. the next morning, Monday through Friday.

During construction, SW Macadam Avenue will remain open in both directions but traffic will be reduced to one lane in each direction and some turning movements could be restricted. As with any construction project, safety is our first priority. Travelers are urged to use alternate routes and are reminded to drive slowly, exercise caution, and follow the direction of flaggers when traveling in and around the construction area.

Crews will do their best to position equipment to reduce noise in the neighborhood. For more information about nighttime work and noise, visit the City of Portland Office of Neighborhood Involvement Noise Control Program webpage, call the hotline at 503-823-7350, or e-mail noise@portlandoregon.gov.