Payments on our view/pay bill website will be affected by system maintenance two different times in the next week.

On Sunday October 18th, payments made on our view/pay bill website and 24-hour automated payment line between 2:00 a.m. and 5:00 a.m. may not post on your account until later in the day.

On Tuesday October 20th, between 6:30 p.m. and 8:30 p.m., customers will be unable to access our view/pay bill website or our 24-hour automated payment line. We apologize for the inconvenience. 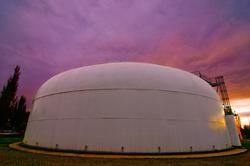 Droughts and natural disasters have been happening throughout history, but what were once-in-a-lifetime events are happening more frequently. The reality of a warming planet and changing weather patterns are clear. It’s a future the Portland Water Bureau has worked decades to prepare for.

Kavita Heyn is the bureau’s Climate Science and Adaptation Program Manager. As a strategist leading  the bureau’s work on climate change, she collaborates with a wide array of people at the bureau, in the City, and throughout the water industry. Portland is seen as an industry leader in its climate adaptation work in part because of Kavita’s active collaboration with leading peer utilities via the Water Utility Climate Alliance.

Guiding the Water Bureau’s ongoing work is the Five-Year Strategic Plan, which was completed in 2019. It takes a risk-based approach to identifying vulnerabilities facing the water system. Director Gabe Solmer says climate work is one of her chief priorities.  “We look at what those risks are and we kind of flip around that negative to look at what are the strategies we’re going to use to mitigate those risks,” Solmer said. “We can take a closer look and put critical importance on the climate change work that we do so well at the bureau and the actions that we take that have a real impact.” 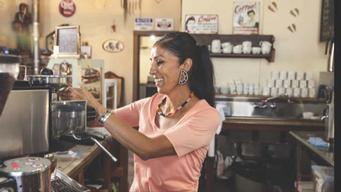 A bison that came to Loretta Guzman in a dream changed the path of her career and her life. At the time she was being treated for cancer, she was visited by ancestors in the form of bison, which provided for the Shoshone-Bannock tribes of Fort Hall, Idaho.

“I knew I had to represent our people from the past into the present,” said Guzman, who is in full remission. “If it weren’t for the decisions of people of the past, and for my grandparents that helped me when I was sick, we wouldn’t be here today.”

Bison Coffeehouse has been serving the Cully neighborhood since 2014. Guzman has called Northeast Portland her home her entire life. Guzman noticed her shop drew in members of the local business community so she brought in bigger tables to accommodate meetings. That adaptive approach has helped her business survive during these challenging times.

“I’ve been open this whole time. When businesses started closing down, I stayed up all night and read all of the regulations to see how we could stay open,” said Guzman. After a brainstorming session with her sister, she and a friend in the construction field built a walk-up window, improved the ground and added more outdoor tables.

She said the SPUR bill credits for her sewer/stormwater/water bill will offset the upcoming costs of additional lights and awnings to make her space inviting through the fall and winter.  Guzman is confident that Bison Coffeehouse will weather this storm. “We’re resilient and we’ll figure it out. I might lose sleep but there will be another day to rest.”

Bison Coffeehouse is one of more than 500 small businesses that received one-time credits through the Small Business Program for Utility Relief (SPUR). 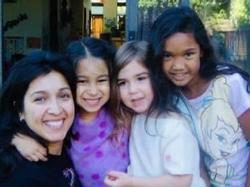 Angie Garcia opened Escuela Viva when she was in need of child care for her two-year-old daughter. Sixteen years later, the dual-language pre-school in North and Southeast Portland is serving 70 families through the pandemic. It is operating as an emergency child care for essential workers.

“There are many amazing things about our childhood education program. Some people might think it’s the dual language but that’s just the icing on the cake. Our community is the cake,” said Garcia.

Despite strong community support, Garcia says Escuela Viva has been struggling to stay afloat because of the stringent and costly protocols that the school must adhere to and the changes in enrollment since the pandemic began.

“We’re an essential part of the infrastructure. If we fail,” Garcia said, “where will the workforce take their children when the economy opens back up?”

Garcia estimates that the SPUR bill credits will cover her sewer/stormwater/water bill for the rest of the year. “To find out we were selected was wonderful,” she said. “We’re struggling but very blessed to have the community’s support.”

Escuela Viva is one of more than 500 small businesses that received one-time credits through the Small Business Program for Utility Relief (SPUR).

Please note that on the morning of Sunday September 20th, between 2:00 a.m. and 5:00 a.m., customers will be unable to access our view/pay bill website or our 24-hour automated payment line due to system maintenance. We apologize for the inconvenience.