Pharmaceuticals and personal care products are a very broad group of substances consisting of human and veterinary medicine, such as pain-relievers, antibiotics, and birth-control hormones, and consumer products, such as fragrances, lotions, and sunscreens. 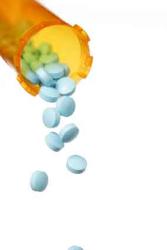 Humans are most commonly exposed to these substances through medications and daily personal care routines. However, trace amounts of these compounds have been found in water around the U.S.

These compounds can be introduced to the environment in several ways:

Do these compounds pose a risk to ecological and/or human health?

Have these compounds been detected in Portland’s water?

After several rounds of testing, one sample tested from the Bull Run drinking water supply contained caffeine, and eleven samples tested from the groundwater drinking water supply contained caffeine or a medication, which included over the counter pain relievers, hormones found in birth control, antidepressants, and antibiotics. All compounds were detected at extremely low parts per trillion levels. Additionally, sample quality control methods that were followed during the testing process indicate that there may have been sample contamination from the environment or the sampling and testing process. Therefore, the findings are not conclusive.

However, the fact that a substance has been detected does not mean that the substance is necessarily harmful to humans – it simply means that a substance has been detected. The tests are extremely sensitive and can detect fractions of amounts that people are exposed to through everyday use. For example, for the amount of caffeine that was measured in Portland’s samples, you would have to drink over 400,000 gallons of water to equal the amount of caffeine in one cup of coffee.

What can Portland Water Bureau customers do to prevent medications and other compounds from entering the water?

Customers can help to keep unused medications out of the water supply. Generally speaking, medications and over-the-counter drugs should not be flushed down the toilet or poured down the drain. Specific disposal instructions are provided on the Oregon Health Authority’s Drug Take-Back and Disposal webpage.