This designation officially opened the public comment period and set the date for the Historic Landmarks Commission public meeting and the City Council hearing.

The Water Bureau’s initial LUR application proposes the removal of the Weir Building (screen house), portions of lower Reservoir 4’s basin, and upper Reservoir 3’s basin in Washington Park. The gatehouses, dams, and other historic features will be protected and restored.

Project Details
In order to comply with federal and state mandates, and ensure a healthy, resilient, and secure water system, the Portland Water Bureau is moving forward with a project to update the Washington Park reservoir site. 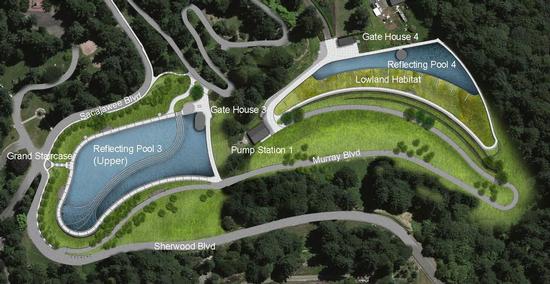 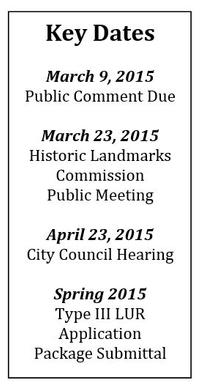 Public Comments
Public comments on the initial LUR application received by Monday, March 9 will be part of the official record and included in the staff report presented during the upcoming Historic Landmarks Commission public meeting. Access a courtesy copy of the LUR application on the Water Bureau’s project webpage at www.portlandoregon.gov/water/wpreservoirs/LUR1.

Please reference Land Use Review number LU 14-249689 in any communications.

The City Council is scheduled to hold a public hearing on Thursday, April 23 to make the final decision on the initial LUR application.

The second LUR application process will also include comments period, public meeting, and hearing to ensure public notification and the opportunity to comment before a final land use decision is rendered.

Visit the Bureau of Development Services’ website or call 503-823-7300 for more information on the land use review application process.