A contractor for the Portland Water Bureau is currently installing large piping connections in the intersection of SE 68th Avenue at SE Division Street.

Google map of the intersection: http://tinyurl.com/pjye2ru 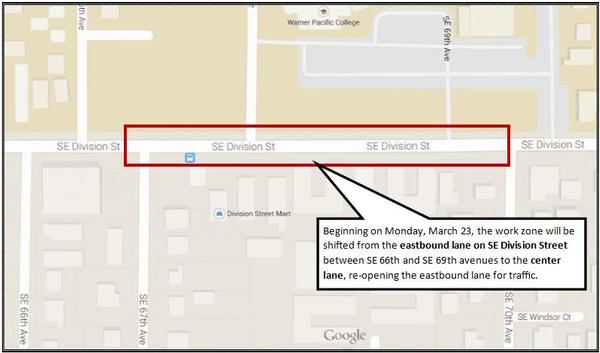 Traffic on SE 68th Avenue, between SE Division and Mt. Tabor Park, is open to local access only. Detour signs are posted and sidewalks remain open for pedestrians.

Motorists and bicyclists are urged to use alternate routes, remember to drive slowly, and exercise caution when traveling in and around the construction area. Typically, work hours are 7 a.m. to 4 p.m., Monday through Friday, with possible occasional Saturday work.

This work is slated for completion in spring 2015.

The new piping is part of the water system improvements required to connect two of the city’s large water conduits to the Westside supply line.