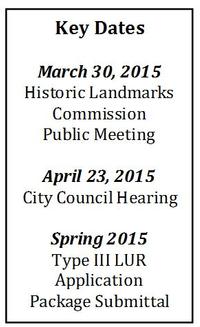 The report will be utilized during the upcoming Historic Landmarks Commission public meeting scheduled for Monday, March 30 at 1:30 p.m. on the second floor of 1900 SW Fourth Avenue, Conference Room 2500A.

Access a courtesy copy of the report on the Water Bureau’s project webpage.

Project Details
In order to comply with federal and state mandates, and ensure a healthy, resilient, and secure water system, the Water Bureau is moving forward with a project to update the Washington Park reservoir site.

On February 9, BDS deemed the Water Bureau’s initial LUR application as complete and issued a “Request for Response.”  This action officially opened the public comment period and set the date for the Historic Landmarks Commission public meeting and the City Council hearing.

Provide Feedback
Public comments on the initial LUR application can be faxed to 503-823-5630 or mailed directly to:

Access a courtesy copy of the LUR application on the Water Bureau’s project webpage.

The second LUR application process will also include a comment period, public meeting, and hearing to ensure public notification and the opportunity to comment before a final land use decision is rendered.