In March 2015, the two cells composing the new 25-million gallon underground reservoir at Kelly Butte in southeast Portland were successfully placed online. The reservoir now serves Bull Run water to customers across the City of Portland and beyond. 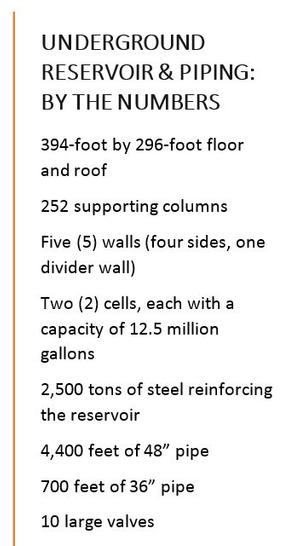 The Portland Water Bureau and Hoffman Construction Company crews began work on the project in late 2012 with demolition of the 43-year-old, 10-million gallon above ground steel tank.

Close to a year of excavation on the butte followed with the removal of about 180,000 cubic yards of rock and soil to make way for the new underground tank two-and-a-half times the old tank's size.

Beginning in the fall of 2013, more than 2,000 truckloads of concrete were brought onsite, pouring the reservoir’s floor.

By summer 2014, the reservoir’s wall, roof, and support columns were completed.

The underground reservoir has now disappeared from view completely, being covered with onsite earthwork.

Work at the site will continue through 2015 with construction of access roads, fencing, landscaping and the strategic planting of more than 1,660 trees and 7,250 shrubs across the entire site. The total project cost was estimated at $90 million and is currently projected to finish under this budget.

The Kelly Butte Reservoir will serve Portland's east side and be a stopover to supply water to the Washington Park reservoir and southwest Portland area water storage tanks.