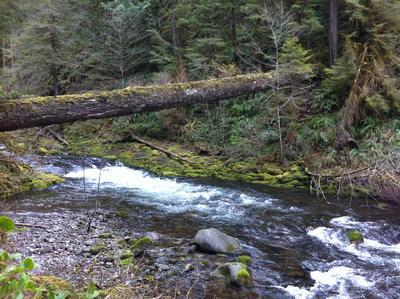 If you’re a skier or snowboarder you probably noticed how warmer-than-average temperatures caused a record low snowpack across Oregon this past winter. These conditions led to drought declarations for several Oregon counties whose water supplies depend on snow-fed river basins. Fortunately the City of Portland is not dependent on snowpack, but instead gets its water supply from mostly rain-fed reservoirs in the Bull Run Watershed and a backup groundwater system. While it is extremely unlikely that Portlanders will have to worry about water use restrictions this summer, the Water Bureau is planning for summer supply needs, as it does every year.

But what do the lack of snow and unusually warm winter temperatures indicate about the region’s climate future? Climate models project hotter, drier summers and warmer, wetter winters, with more rain and less snow falling at higher elevations. Climate change is basically “shifting the odds” in favor of these types of conditions so that warm winters with low snow accumulation in the mountains will become increasingly likely in any given year over the next few decades. Winters like 2014/2015 may therefore occur more frequently in our region’s future.

And while climate change refers to the long-term change in average and extreme weather conditions, the Northwest also experiences climatic variability. For example, short-term yearly or seasonal fluctuations in temperature, rain, and snow are significantly affected by the El Niño Southern Oscillation and the Pacific Decadal Oscillation. These types of events will continue to influence regional climate, especially in the near term. Because of this, Portlanders can expect to see both high and low snowfall winters in the coming years, even as long-term climate shifts make what the region experienced this past winter a more regular occurrence.

To learn how the Portland Water Bureau is actively working to understand climate change impacts to Portland’s drinking water system, visit these resources.