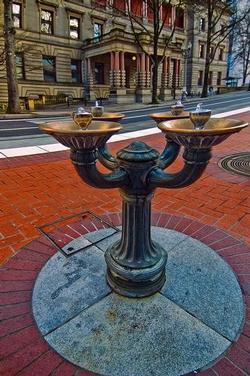 Perhaps the best known drinking fountains in the City of Roses are the legendary Benson Bubblers, the iconic four bronze bowls that provide fresh drinking water throughout downtown. The Benson Bubblers were named after businessman and philanthropist Simon Benson who donated $10,000 for the purchase and installation of 20 fountains in 1912.

Today, there are 51 true four-bowl Benson Bubblers. Forty-eight are installed in downtown Portland while three reside on the Eastside. Three bubblers do exist outside of Portland; two in Portland’s sister cities of Sapporo, Japan, and Guadalajara, Mexico, and the third at the Maryhill Museum of Art in Washington State.

Maintenance is a Must
Ground Maintenance staff are tasked with keeping each of the bubbling fountains cleaned, maintained, and running year round. Cleaning and preserving the different types of fountains takes varying techniques, tools, and parts and much institutional knowledge. The bubblers boost water quality in our distribution system as the water in the pipes stay refreshed.

Practicing Efficiency
The Portland Water Bureau is committed to using water wisely, and has made significant changes in the design and operation of the bubblers over the years to improve their water efficiency.

In 1995, the bureau narrowed the feed lines to the bubblers. This cut water use almost in half. In 2000, the Portland Water Bureau installed timers which shut the fountains off during low-usage periods, generally in the late night and early morning hours. In 2005, the Portland Water Bureau installed small, flow-restricting devices in the bubblers to further reduce the amount of water that each fountain uses. The devices do not affect the physical appearance of the fountains, but they do reduce the amount of water the fountains use by an additional 40 percent.

The bubblers now use less than a tenth of 1 percent of Portland’s daily water demand.