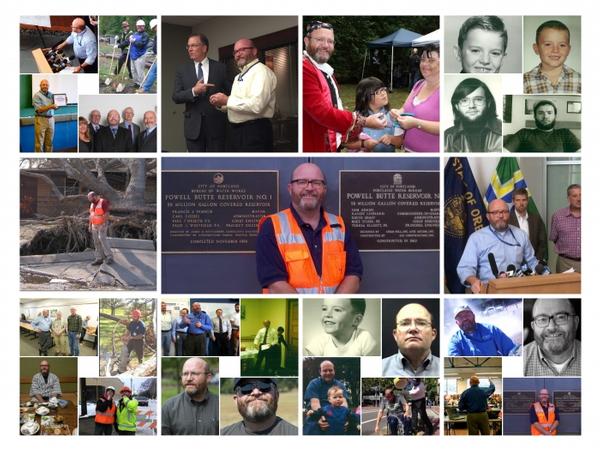 After 37 years of service to the City of Portland and its residents, David G. Shaff has officially retired from his position as Water Bureau Administrator.

Hired to the City in 1978, David worked his first 25 years in the Bureau of Human Resources, primarily in Labor Relations. He was responsible for negotiating each of the City's collective bargaining agreements multiple times. David ended his tenure there as the City's Labor Relations Manager in 2003.

In 2004, he joined Commissioner Randy Leonard's staff as a policy advisor.

One year later, David was appointed Interim Administrator of the Portland Water Bureau and then appointed permanently in July 2006.

For the past 10 years, David served in that capacity, dedicated to delivering “the best drinking water in the world” to the Portland metropolitan area, keeping needs and desires of customers in the forefront of thoughts and actions, using ratepayer dollars wisely, and protecting the natural environment so its benefits were available to meet today and future generation’s needs.

While there were some bumps and frustrations along the way, David can easily say that he regarded time at the Water Bureau as “challenging, rewarding, and fulfilling.”

“I am most proud of the efforts the bureau has made toward preparing for a major seismic event,” says David. “While we can do more, we have hardened at least one conduit coming from the Bull Run Watershed into town including the Sandy River Crossing; we have built and are designing new terminal storage reservoirs that are intended to function even after “the big one”; we are designing a new crossing under the river to address the probability that several of our older crossings will fail; and we have built the necessary facilities (the EOC and Interstate Warehouse and office buildings) to protect the safety and well-being of our employees and ensure our continuity of operations after a major event. Most recently, I am very proud to have been involved in crafting an historic agreement with the Mt. Tabor Neighborhood Association regarding how we will maintain, repair, and preserve the reservoirs at Tabor into the future.”

Thank you David for your dedication and professionalism to the City, the Water Bureau, and the citizens of Portland. The Water Bureau wishes you the best of luck on your quest for new challenges, rewards, and fulfillment.