From Monday, September 14 to Friday, September 18, a contractor overseen by the Portland Water Bureau will access an underground vault through a manhole cover at SE 147th Avenue and SE Powell Boulevard to conduct a water system valve emergency repair. 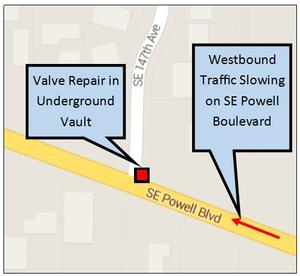 Due to the manhole cover’s location, traffic control and flaggers will be in place to help safely move motorists and bicyclists traveling west on SE Powell Boulevard around the work at the intersection of SE 147th Avenue and SE Powell Boulevard.

Motorists and bicyclists are encouraged to safely move around the cones, watch for signage, and stay alert and use caution as traffic may suddenly stop. Pedestrian access on the west side of SE Powell Boulevard will remain open.

The pipeline was installed in 2014 and protects the vital water connections of Powell Butte Reservoir 2 to the city’s water system.