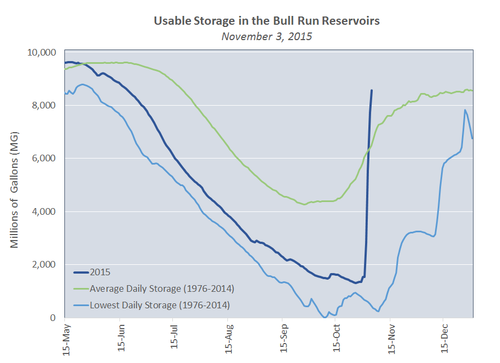 What a difference one weekend can make!

On October 30, the first strong storm of the season rolled into the Pacific Northwest. Streets flooded, drains were clogged with debris, and gutters overflowed in the Portland metro area after nearly two inches of rain fell over a stretch of six hours.

In the Bull Run Watershed, the rain gauges registered between 4.5 and 10 inches of rain over the Halloween weekend.

These significant rains began quickly refilling Reservoir 1 and Reservoir 2, capable when full of holding a combined 16.8 billion gallons of water.

By November 3, the two reservoirs were nearly full, allowing the Portland Water Bureau to switch from using a groundwater/Bull Run water blend to 100 percent Bull Run water. Groundwater had been used for supply augmentation purposes since July 16 due to a long and dry season.

The bountiful rain in the Bull Run Watershed also ended the Water Bureau’s longest reservoir “drawdown” on record. Drawdown is the period of time during the spring/summer and early fall where more water leaves the reservoirs than enters. Bull Run reservoirs started drawing down on May 18, about six weeks earlier than the historic average.

The expected wet season weather is expected to keep the Bull Run reservoirs at or near capacity until late spring or early summer 2016.