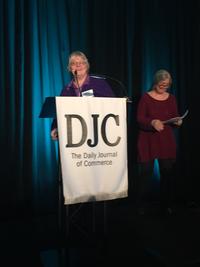 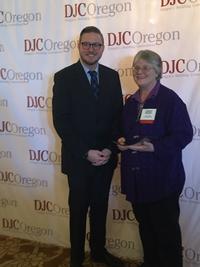 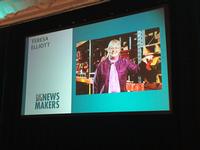 Teresa demonstrated her commitment to developing community-based solutions when she worked closely with a group of passionate neighbors during her oversight of the Water Bureau’s open reservoir disconnection project. In November, she accepted the Spirit of Portland Award on behalf of the Water Bureau for outstanding dedication to positive change in our community, jointly with the Mt. Tabor Neighborhood Association. Commissioner Amanda Fritz nominated the Portland Water Bureau and the Mt. Tabor Neighborhood Association for this award, recognizing their success in negotiating an agreement on disconnecting the open reservoirs in Mt. Tabor Park. The open reservoirs at Mt. Tabor were taken offline by the Dec. 31, 2015 deadline.

As Chief Engineer, Teresa oversees a team of 125 engineers and support staff. Teresa’s passion, which brought her to the Water Bureau in 1996, is her vision for a seismically resilient water system. Teresa was on one of the two Water Bureau teams who went to New Orleans in the aftermath of Hurricane Katrina to help put their water system back together. That experience and a long career in overseeing projects that fortify our infrastructure locally and abroad, have helped the Portland Water Bureau earn a reputation as a statewide leader in seismic resilience work.

Teresa discussed her passion for earthquake preparedness and the Water Bureau’s upcoming projects on a recent episode of Think Out Loud titled Earthquake-Proofing Portland's Water on Oregon Public Broadcasting.

Congratulations, Teresa! We can’t wait to see what you will do next.