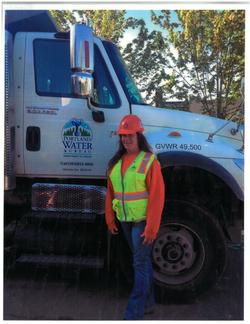 Wanda was a Seasonal Worker for Portland Parks before becoming an Apprentice Utility Worker for the Water Bureau in 2001. She is now a Utility Worker II. Wanda has a commercial driver’s license and operates six- and 12-yard dump trucks. She is learning to locate water mains and operate a backhoe. Wanda was on the Water Bureau’s tapping team for American Water Works Association (AWWA). 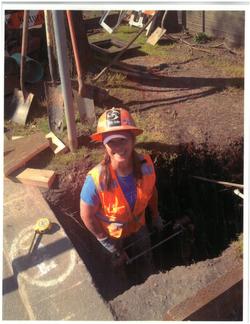 Joy previously worked at Ready Made Barricades Inc. She became a Utility Worker Apprentice II for the Water Bureau in 2003 and before she finished her apprenticeship, she applied to become a Water Operations Mechanic. She is a crew leader and runs her own crew. She is also a trainer for new employees. Joy was on the Water Bureau tapping team for American Water Works Association (AWWA). 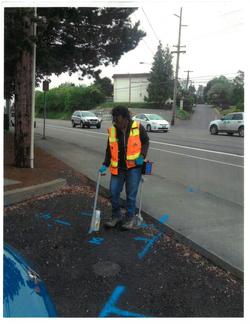 Colette was a Water Bureau intern in 1992 in the landscaping department and went to work at Portland Parks in 1993 as a Maintenance Worker and then a gardener. In 1997, she became a Utility Worker II at the Maintenance Bureau and was in the Labor Pool. She worked in street cleaning, structures, night ops. and traffic. Colette has a commercial driver’s license and has operated six- and 12-yard dump trucks, sweepers and flushers. She has also filled in as a Public Works Supervisor I. In September 2006, she came back as an Engineering Tech 1 which is called a Utility Locator at the Water Bureau. Colette locates all of our water mains and water services in the field.