Teresa is well known throughout the Portland Water Bureau as one of our capable office managers. She is also a survivor of the Mount St. Helens eruption on May 18, 1980.

Here is her story.

After arriving in Washington in May 1980, I was given the choice to go camp at the Pacific Ocean or a volcano. On May 17, we loaded camping gear and headed toward Mount St. Helens.

At about dusk, we turned onto a gravel road and passed a sign that read “Entering Red Zone.” I had no idea what this meant.  As we neared a ridge, we decided to camp and steered the 1958 pickup down a sloping trail to a small clearing. 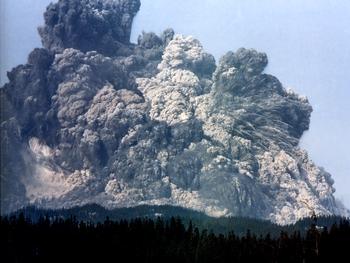 The next morning, I heard an enormously loud violent rumbling of what I took to be thunder, but there was sunshine and no hint of rain. In the blue sky, a black cloud roiled upward in the distance and then a dark grey cloud charged toward us.  As I yelled for my companion, I stood mesmerized by the largest lightning bolt I had ever seen.

“She’s gone off,” my friend yelled.

Suddenly, it was pitch black all around us. I was pelted by what felt like hailstones and could hear them hitting the ground around me.  I followed my friend’s voice to the truck where he grabbed a flashlight, but it was useless—no light penetrated the darkness.  Inside the cab, we wet bandanas and covered our faces to keep the ash out of our lungs in the stifling air.

We backed the truck up the steep trail with my companion dangling from the truck’s side shouting steering instructions as I struggled to operate a clutch for the first time, intermittently grinding the gears.  It took about an hour to return to the gravel road.

By then, the ash fall was light enough to see about two to three feet with the truck headlights altered downward.  He drove while I leaned out the window swiping away the constantly falling ash off the windshield.  We yelled and used the horn to find others in the dark.  We found a youth group immobilized by the dense ash. My companion lowered their headlights and encouraged them to keep moving forward.

Time went by very slowly, as did we. Eventually the ash fall lessened and we could increase our speed.  A few hours later, we made it to a small café in Randle, Washington, seeking refuge.  I realized when I looked into the restroom mirror why we were so fiercely stared at as we entered.  We both were wearing sunglasses with bandanas pulled over the top rims and still had the wet bandanas on our faces.  When I untied the bandana from my hair, the sink suddenly filled with a thick layer of ash and pumice.

Later, we happened upon an off-season lodge that became an emergency refuge.  Two days later, we were able to travel. I called my mother to let her know I was okay. She responded with “What volcano?”

Once home, I realized my first, and last, perm had not fared well, having been coated for days in abrasive rock ash. I did receive a proposal of marriage from my companion who was impressed that I had not panicked at any moment during our experience.

I still look at pictures and read about Mount St. Helens, sometimes fascinated and sometimes emotional when I realize again just how close to the edge of disaster we were and how much different the experience would have been if we had gone to the next ridge.