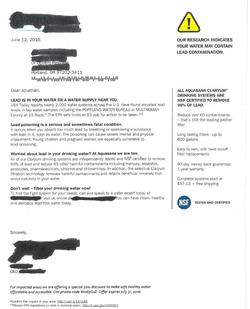 The Portland Water Bureau shares our community’s concerns about the recent detections of lead in water in area schools and other facilities. Unfortunately, a private home drinking water treatment company is trying to capitalize on these concerns with inaccurate advertising that may confuse some customers.

While some treatment can be an effective method for removing contaminants from water, including lead, it is important for consumers to make informed decisions regarding the water in their homes based upon accurate data and facts

Here are the facts that you need to know:

The main source of lead in water in the Portland area is household plumbing. Lead is rarely found in Portland’s source waters, and there are no known lead service lines in the distribution system. Lead solder was commonly used in homes built or plumbed with copper pipes before 1985. Lead can also be found in brass plumbing fixtures and components.

Because lead exposure is localized to the plumbing in high-risk homes and buildings, your home would not necessarily be at risk solely on the basis that  your neighbors’ home has a high lead detection.

The only way to know if your home plumbing contains lead solder is to test. Free test kits are available by contacting the LeadLine, 503-988-4000 or leadline.org.

From 2013 to 2016, more than 15,000 lead tests were conducted in Multnomah County. Of those, elevated blood lead levels were found in 188 children. No cases were traced to lead in drinking water from any source.