The Portland Water Bureau Conduit 3 Hydroelectric Project has received an Excellence in Engineering Award from the Pacific Northwest Section of the American Water Works Association (PNWS-AWWA).

The award celebrates outstanding drinking water related engineering projects which have led to overall cost savings to the water using community, provided enhanced safety to the public and/or water resources, resulted in extended asset service life, or integrated a cutting edge technology in the design. 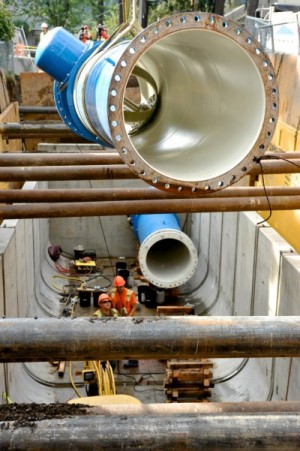 The system is installed in 50-feet of Portland water pipes, in sections where the water flows downward due to gravity. There are four sections of pipe, and each has a generator on top and a 42-inch turbine that spins as the water flows inside. (Photo credit: Sherri Kaven)

The Portland installation is the first project in the United States to secure a 20-year Power Purchase Agreement (PPA) for renewable energy produced by in-pipe hydropower in a municipal water pipeline. 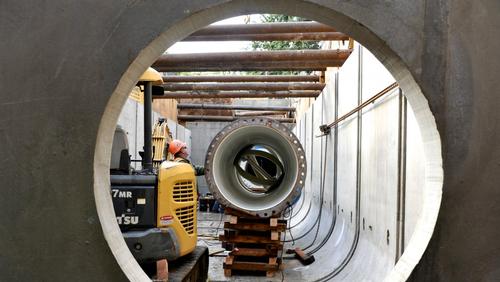 The turbines were installed by replacing a section of existing pipe with Lucid’s pipe, and bolting that new pipe to the existing water system. (Photo credit: Sherri Kaven)

The project not only supports the Water Bureau’s objective of reducing the cost of delivering safe, clean drinking water to Portlanders, but also supports the City of Portland’s Climate Action Plan goals and its plan to identify and collect new sources of revenue.