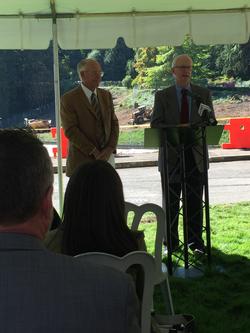 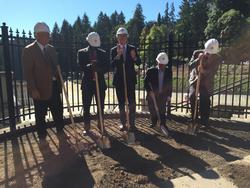 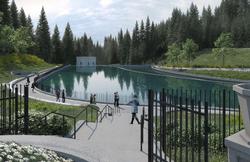 Today, distinguished guests joined the Portland Water Bureau, City of Portland, and Hoffman Construction Company to break ground on the Washington Park Reservoir Project. Once complete and online, the 12.4-million-gallon underground reservoir will supply water to Portland’s west side, including all downtown businesses and residents, 20 Portland public schools, five hospitals, the Oregon Zoo, and more than 60 parks.

“The time to invest in the next generation of Portland’s water infrastructure is now – and we are seizing the moment,” said Water Bureau Director Michael Stuhr. “This project is an example of the many infrastructure improvements we are undertaking throughout the city to continue providing our customers with safe, reliable, high-quality water into the future.”

The new reservoir will be built to withstand a major earthquake and landslide while still maintaining the historic drinking water function provided by the original reservoirs. A reflecting pool will be featured on top in the same general footprint as the historical Reservoir 3. Reservoir 4 will be disconnected from the public drinking water system, and a lowland habitat area/bioswale and a reflecting pool constructed in the basin. The project complies with federal and state mandates, seismically strengthens key water infrastructure on Portland’s west side, and helps ensure a healthy, resilient, and secure water system.

Speakers at the groundbreaking event included:

The ceremony was held at the Washington Park Chiming Fountain.

Washington Park is open during project construction. For information about the project, including park impacts, travel options, and to sign up to receive monthly updates, please visit www.portlandoregon.gov/water/wpreservoirs.