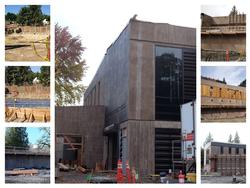 Construction of the Hannah Mason Pump Station in Southwest Portland is on schedule to be completed in December 2016. The new pump station replaces the aging Fulton Pump Station that was built in 1912. The project area includes Southwest Nevada Street, Southwest Macadam Avenue and several locations within Willamette Park where the new pump station is located. The Water Bureau has been coordinating with Portland Parks & Recreation and other local agencies to integrate this project with ongoing operations and other projects in the area.

In early fall, operations and maintenance training was conducted, and testing began on the pumps. It is anticipated that the pump station will be fully operational in December.

All restoration work on Southwest Nevada Street, including sidewalks and driveways, was completed in early October. Several sections of the Greenway Trail within Willamette Park received trail improvements as part of a larger project to make improvements to Willamette Park during the pump station construction.

The last few sections of the pump station, including the restrooms, were completed after the final concrete pour of the floor and roof in early November. When construction is complete, the Hannah Mason Pump Station will house five pumps, equipment storage, replace the existing restrooms removed for construction, and will complement the park with a subtle design meant to blend into the surrounding landscape.