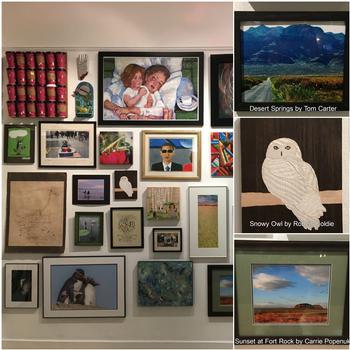 To kick off the new year, the Portland Water Bureau is celebrating some of our very own artists! Every year, the City of Portland and Multnomah County hosts an exhibit titled all the art that fits in the Portland Building lobby. This year, seven talented Water Bureau artists were featured.

We checked in with some of those artists to find out more about what inspired them to create their pieces. 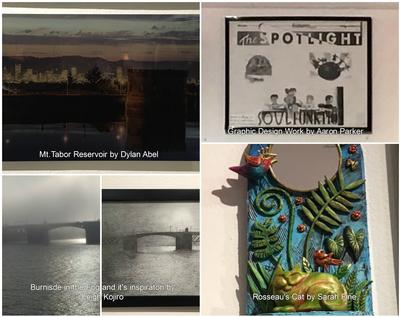 “Saw the scene on a ride back to downtown from Interstate.
Captured the picture with my phone.
Tried to draw the picture.”
Leigh Kojiro, Electrical Engineer

“I think of myself as more of a snapshooter than a photographer, and periodically pick out shots to keep. My family moved from Denver to Los Angeles in 1925, and they followed the Pony Express/Butterfield Stage Route from Salt Lake City to near Ely, NV. I drove this route—which includes about 200 miles of unpaved road—and snapped my photo somewhere just south of the Great Salt Desert in western Utah.”
Tom Carter, Senior City Planner

“I found a picture of a snowy owl in an environmental magazine, and thought it would make a lovely marquetry project. I tried to keep it simple, and use the grain of the wood to emulate the feathers. I think it came out nicely.”
Bob Goldie, Senior Planner

You can see these pieces, and all the art that fits, in person in the lobby of the Portland Building at 1120 S.W. Fifth Ave. in Portland between 8 a.m. and 5 p.m. until January 9.

Please join us in welcoming the new year by recognizing some of the creative minds at work at the bureau every day.