Portland is a special place to live. From Forest Park to the Bull Run Watershed – where Portland gets its clean, fresh water – we are fortunate to live in a place that values its uniqueness and recognizes the importance of preserving its history. 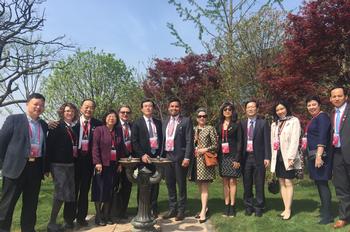 One of the most charming Portland legacies is the Benson Bubbler, the four-bowl bronze drinking fountains dotting downtown’s busy sidewalks, and their one-bowl cousins spread throughout the city. These iconic fountains serve up Bull Run drinking water to Portland’s visitors and residents from 6:00 a.m. to 11:00 p.m. daily. The Benson Bubbler water fountain is an enduring legacy reflecting over 100 years of Portland history.

And while most Benson Bubblers are indeed located in Portland’s thriving downtown area, three Benson Bubblers can be found outside of Portland city limits, including one in Pendleton, Oregon; Sapporo, Japan; and Suzhou, China.

This week on Jan. 27 marks the one-year anniversary of Portland City Council voting to allow the Portland-Suzhou Sister City Association (PSSCA) to transfer a Benson Bubbler to Suzhou, China, honoring the 15-year anniversary of Lan Su Chinese Garden. Lan Su Chinese Garden is a product of collaboration between the cities of Portland and Suzhou in Jiangsu Province, a province famous for its Ming Dynasty Gardens. The City of Suzhou is located about 60 miles (100 km) Northwest of Shanghai. The Benson Bubbler arrived safely in Suzhou in February 2016 and was unveiled in April of that same year at the 9th Jiangsu Horticultural Exposition, an event that drew millions of visitors to the shores of Taihu Lake.

Learn more about the iconic Benson Bubblers, including their history and the bureau’s conservation efforts, by visiting the Water Bureau’s Benson Bubbler page. Then find out more about the Portland-Suzhou Sister Association at http://www.portlandsuzhou.net. No ratepayer funds were spent on the Suzhou Benson Bubbler and none were removed from service or otherwise uninstalled as part of this sister city project.