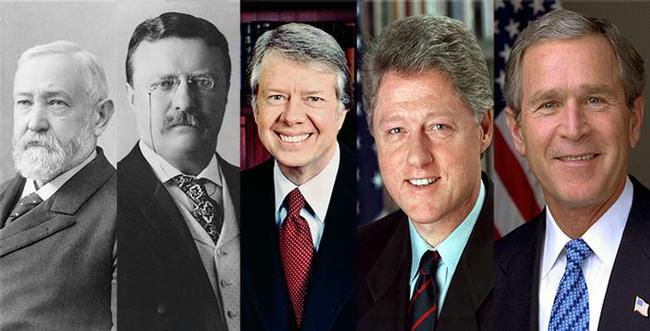 Presidents’ Day is a time to remember and reflect on the contributions made to our country by each of our past U.S. Presidents.

Washington, D.C. may seem worlds away from Portland, Oregon, but five past Presidents had a part in helping preserve the Bull Run Watershed – the federally-protected reserve that supplies fresh, clean drinking water to over 900,000 Oregonians every day.

Let’s take a moment to learn about these five past Presidents who helped protect this important natural resource.

In 1892, using powers granted to him under the Forest Reserve Act passed by Congress a year prior, President Benjamin Harrison established the Bull Run Forest Reserve which prohibited settlement in the 142,000-acre reserve. President Harrison’s act also made it easier for the Portland Water Committee (later renamed the Portland Water Board) to acquire private land and water rights in the basin. The establishment of the Forest Reserve set a precedent for federal protection of the Bull Run. It was the first step of many in protecting and preserving the delicate ecosystem that supplies Portland’s drinking water.

Despite the new settlement restrictions signed into law by President Harrison, fishing, hunting, camping and livestock grazing were still allowed in the newly-created Bull Run Forest Reserve. Because of this, the Portland Water Board sought additional land use restrictions within the reserve to further protect Portland’s drinking water supply.

In 1904, President Theodore Roosevelt signed into law the Bull Run Trespass Act which further limited entry and activities – including grazing – in the Bull Run Forest Reserve. But the specific wording of the law left the law open to interpretation, planting seeds for conflict over access and forest management in the Bull Run. Over the next half-century, the Portland Water Board, which would become the Water Bureau in 1913, completed a variety of infrastructure projects – including adding diversion structures, water conduits and others – to the original system. But by the mid-1950s, the City of Portland and the U.S. Forest Service began to disagree about logging and public access in the watershed.

In 1977, President Jimmy Carter signed into law the Bull Run Act (PL 95-200). The law replaced the Trespass Act of 1904 and declared that the principal management objective of the Watershed to be the production of “…pure, clear, raw potable water…for the City of Portland and other local government units and persons in the Portland metropolitan area.” Other activities inside the watershed were permitted, provided they did not interfere with the primary objective of the Watershed.

President Clinton signed into law the Oregon Resource Conservation Act of 1996. This law amended the Bull Run Act and prohibited all timber harvest on all Forest Service lands within the Bull Run River drainage except for tree cutting needed to protect or enhance water quality or water quantity and for the development, operation and maintenance of hydropower and water supply facilities. This Act largely ended the logging controversy in the Bull Run.

To learn more about the Bull Run Watershed and how federal, City and State protections safeguard this important resource, click here.