On March 15, the Portland Water Bureau will return to the Bull Run Watershed as its drinking water source. The decision to re-activate Bull Run was made after conferring with the bureau’s regulators at the Oregon Health Authority and in consultation with our public health partners at Multnomah County.

On Feb. 13, the Portland Water Bureau activated water from the Columbia South Shore Well Field in response to recent low detections of Cryptosporidium in the Bull Run. Using the high-quality secondary source allowed for the bureau to conduct further monitoring and investigation, and work with health officials to monitor community health data. Based on data collected and investigations conducted, the bureau continues to believe the health risk to the public from Bull Run water is low. 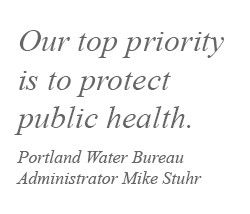 “Our top priority is to protect public health,” said Water Bureau Administrator Mike Stuhr. “The evidence and data collected, along with input from our partners with the Multnomah County Health Department and regulators at the Oregon Health Authority, indicates the risk remains low.”

The Multnomah County Health Department routinely monitors for illness caused by Cryptosporidium. To assure adequate reporting Multnomah County health officials issued a provider alert to local clinicians on Feb. 1, 2017, to inform them of the Water Bureau’s findings so that suspected cases would be tested. Even with this additional awareness, public health officials report there have actually been fewer than expected cases of Cryptosporidium illness reported so far in 2017.

“Our ongoing surveillance for Cryptosporidium illness has not detected any unexpected increase,” said Multnomah County and Tri-County Health Officer Dr. Paul Lewis. “At this time the general public does not need to take any additional precautions. As always, we recommend that people with severely compromised immune systems discuss their individual health needs with their physicians.”

The most recent detection for Cryptosporidium was from a sample collected March 8, 2017, that had one oocyst. While it is likely that low-level detections of Cryptosporidium from the Bull Run will continue, current evidence from public health data, monitoring results, and watershed investigations, as well as extensive consultation with public health officials, have provided confidence in the Portland Water Bureau’s decision to resume delivering Bull Run water.

The bureau will continue to sample the Bull Run for Cryptosporidium and gather information about these detections. The public and the media are encouraged to view all sampling results posted to the City’s website at www.portlandoregon.gov/water/cryptoresults. The media will also be notified of any further low-level detections on a weekly basis, if they occur. The bureau will also notify the media and public immediately should further testing results indicate a risk to public health.

The Portland Water Bureau informs the media and sensitive users when there is a change in water source or significant operational changes. It may take up to two weeks, depending on location, for Bull Run water to make its way through the distribution system to homes and businesses.