Up to 14 million gallons of water move through this pump station every day as it pushes water uphill through Portland’s Southwest hills. Pumping water uphill is the Water Bureau’s largest single use of electricity, system-wide. Making pumping more efficient saves energy and money and reduces carbon emissions.

By combining energy-efficient pumps, an innovative pump station design, and the properties of gravity, the Portland Water Bureau is cutting annual energy costs by nearly $163,000 and also contributing to achieving goals outlined in the City of Portland’s award-winning Climate Action Plan.

“The new Hannah Mason Pump Station supports a citywide goal of reducing energy use by 2 percent,” said Portland Water Bureau Administrator Mike Stuhr. “Energy Trust’s assistance allowed the City to make a major contribution to meeting these goals with an investment that will pay for itself in only 3.3 years.”

Energy Trust provided technical assistance on the project which enabled the Water Bureau to identify an estimated annual savings of 2.37 million kilowatt hours. The carbon equivalent for these savings is 610 metric tons, or approximately 1.345 million pounds, of CO2 reduction.

“We commend the Portland Water Bureau for seizing the opportunity to rethink how to efficiently deliver water to the residents of the city’s west side,” said Energy Trust Executive Director Michael Colgrove. “We’re excited to be part of this project that not only saves energy, but improves the overall quality of the pumping system while providing benefits to both water and electricity ratepayers.”

How Energy Is Saved 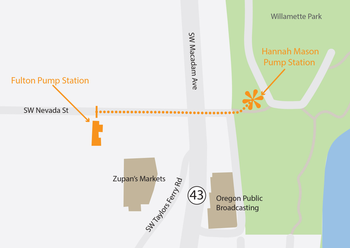 In addition, Portland Water Bureau opted to use hydraulically-operated butterfly valves for pump control which reduces the head pressure the pumps must provide, reducing energy use another 14 percent compared to more traditional diaphragm control valves.

Hannah Mason Pump Station is the first Water Bureau infrastructure project named after a woman. A philanthropist, landowner, and widow of Portland Mayor William S. Mason, Mrs. Mason owned most of the land on which Willamette Park sits today.