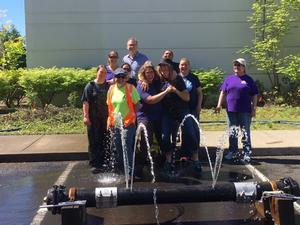 What is your role at the Water Bureau?

I am a utility worker II in the Maintenance and Construction group. 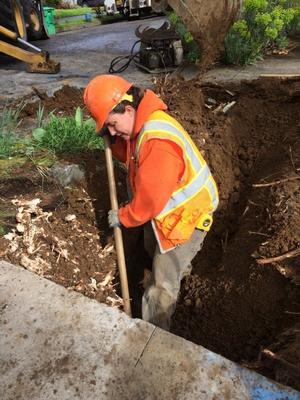 How did you first get involved in the trades?

I graduated from Oregon Tradeswomen's seven-week pre-apprenticeship class. After that, I joined the Laborers' Union Local 296 and worked on such projects as the Sellwood Bridge and Oregon Zoo Elephant Lands before joining the Water Bureau in November 2016.

Describe your typical day for us. What does that look like?

The maintenance and construction field crews arrive at 6:45 every morning.

Each crew will typically consist of a mechanic, one to three utility workers, a backhoe operator, and a dump truck driver. After receiving our work orders for the day, we stock up on parts and tools, fuel our vehicles, and report to our job sites.

The first thing we do on-site is set up traffic control. After excavating, we could be doing anything from installing water mains and domestic or fire line services to replacing fire hydrants. At the end of each day, we report back to our maintenance offices where the mechanics will file paperwork while equipment operators and utility workers clean and prep their vehicles for the next morning.

What are the barriers that you see as the largest impediments to more women working in the trades? Has that changed over time?

Childcare is a challenge for women in the construction industry. The hours can be unpredictable and often start earlier and end later than those typical of daycare facilities. When workers are laid-off, they can be called back to work spontaneously and must be prepared to start work anytime, anywhere, and with little notice.

Another barrier keeping women from the trades is lack of exposure. It simply doesn't occur to most women that a career in the trades is an option for them. Traditional gender roles and reduced school funding are contributing factors.

There is actually a summer camp for female youths here in Portland called Girls Build. School-aged girls are taught how to use hand and power tools while working on projects for the community. They even learn how to change a tire! Apprenticeships and shop classes seem to be making a bit of a comeback. So, programs like these will be instrumental in turning women on to the trades. 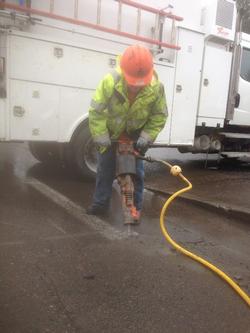 How do you see fellow tradeswomen supporting each other in the work you do?

I'm very fortunate to be living and working in Oregon for many reasons. I'm especially lucky to be a tradeswoman in Oregon. Oregon Tradeswomen provides a network of local "lady tradies" to reach out to for mentorship and advice.

On the day to day, I see tradeswomen support each other in one of two ways. We're either going to be eager to take people under our wing or be especially tough in order for them to discover their grit.

What or who is your greatest professional inspiration?

Connie Ashbrook, co-founder and executive director at Oregon Tradeswomen, Inc. She started off trailblazing as an elevator mechanic, organized OTI as a social network of local tradeswomen in the 90s and built it into the program that it is today. I can only imagine the grit she must have had in the field! Her dedication to advocacy is beyond admirable.

Either at the Water Bureau or beyond, which women have served as your professional role models or mentors?

There are so many that I could dedicate an entire interview to this one question!

Aida Aranda from the Laborers' Union was an early mentor and I know I can still rely on her for advice to this day. Annette Wood, who now works as a dispatcher for the Water Bureau, was incredibly supportive and helpful during my apprenticeship. Rebecca Jones manages to be an amazing and highly-respected woman in the trades while raising three young children at home. That never ceases to impress me.

What advice would you give to a young woman considering a career in your field?

Seek out other female tradesworkers. Apprenticeship is tough for everyone but you'll benefit from confiding in someone who understands your unique situation. Be determined and persistent. Never let anyone take a tool out of your hand. Most of all, remember that the only person you need to compete with is the one you were yesterday.

Do you have any interesting stories to share about your work out in the field?

I was working on a main break overnight in January. It was bitter cold out and a couple of nice fellas offered me a coffee.