Portland has quickly grown into a dense city, but thanks to John, Public Works Supervisor, and his Water Bureau Maintenance & Construction crews, a little piece of Portland maintained their small-town feel.

When Ladds Addition neighbors received notification of an upcoming Water Bureau construction project, several people reached out to our maintenance and construction team to let us know that our work was slated to occur early October—smack in the middle of a beloved neighborhood parade, Tour de Ladd.

Excavators, gravel fill, and tricycles don’t always share the road nicely, so John and his crews rearranged their timing to complete the scheduled work in advance of the event. 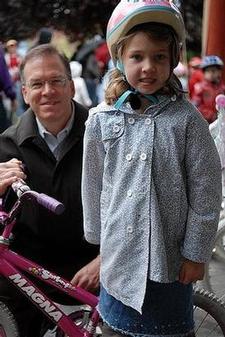 Tour de Ladd, is the first event of its kind put on by Abernathy Elementary School. Beginning in 2008, and true to Portland’s style, school kids chose to hold a bike-a-thon fundraiser instead of a walk-a-thon. The event receives support of local neighbors, community businesses, the Bicycle Transportation Alliance, and even Commissioner Nick Fish!

But John didn’t know the background story of the kids’ event. He just knew how to deliver the same superb customer service and accommodation the whole city receives.

John and his crews even stopped by during their breaks on other nearby jobs to expedite prep work and tasks. True to how we do things at the Water Bureau, crews completed the job a week early, even amidst challenges and shorthandedness.

Thank you, John and your crew, for being such good neighbors and helping to ensure the 2017 Tour de Ladd happened without a hitch.

Check out this video the school made to get a peek at why Tour de Ladd is so important to the neighborhood.