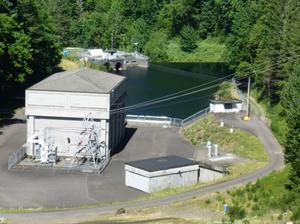 The rain has returned, and the Bull Run reservoirs are once again overflowing.

On an average day, Reservoir 1 and 2 serve up about 80 million gallons of water to residents across the Portland metro area.

But before water flows into town to provide water to homes, schools, hospitals, and businesses, it does double duty, generating enough electricity to service an average of 8,000 homes for a year. That’s almost as many homes as people live in downtown Portland’s Northwest District.

The City’s Bureau of Hydroelectric Power, a separate entity from the Water Bureau, manages the two hydroelectric plants situated at the bases of Reservoir 1 and Reservoir 2 in the Bull Run Watershed.

Get a Dam That Can Do Both

The hydroelectric plants have been maintained and operated by Portland General Electric (PGE), which has been a great deal for Portland residents for decades – netting the City’s General Fund a cool $14 million dollars in its 35 years of operation.

Last year, Portland General Electric notified the City that it would not be continuing its current contract with the City. And on Aug. 30, Council decided to stay in the hydroelectric power business, approving new contracts with PGE and new partners EnergyNW and Eugene Water & Electric Board as contractors to run various parts of the power system.

With this new Power Purchase Agreement with PGE, the City will continue to produce hydroelectric power for years to come.