As you probably heard, the City of Salem issued a drinking water advisory over Memorial Day weekend, May 29, that warned children and vulnerable populations to not drink tap water. The advisory was issued due to low levels of algal toxins in Salem’s drinking water.

Since then, we’ve received some questions:

We’ll answer these one by one.

Is the Bull Run water supply vulnerable to the same algal blooms that caused the Salem water crisis?

Portland’s drinking water is not currently experiencing an increased level of blue-green algae, the type of algae that can produce cyanotoxins. There has never been a blue-green algal bloom in the Bull Run water source.

The Bull Run has occasionally experienced increased concentrations of non-toxin producing algae in the past.

Does the Water Bureau test for algae?

Yes! The Portland Water Bureau samples for algae at the Bull Run source water intake on a weekly basis.

How would the Water Bureau address a similar issue in Portland’s drinking water supply?

If the bureau detected significant concentrations of blue-green algae that posed a public health risk, it has the flexibility to switch to its high quality groundwater source, the Columbia South Shore Well Field. The well field is not at risk for any type of algal contamination. 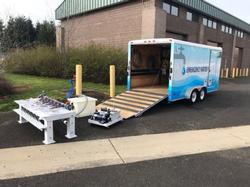 What did the Portland Water Bureau do to help Salem?

On Thursday, May 31, the Portland Water Bureau delivered two 1,000-gallon water containers and an emergency water distribution trailer to Salem to assist them with their drinking water advisory. The trailers were set up at the Oregon State Fairgrounds to distribute clean drinking water to Salem residents.

Explore the Water Quality webpage to discover how the Portland Water Bureau monitors and tests the safety of your drinking water.