� ALERT: Your help is needed solving the case of a missing #BensonBubbler at SE 65th and Foster Rd: https://t.co/9aEsVMXujP � pic.twitter.com/ZEl4h8XB70

The single-bowl Benson Bubbler at SE 65th and Foster has had a rough year. This spring the drinking water fountain was the victim of a car accident and taken out of commission for several weeks for repairs until it was restored in June.

And now it appears that the beloved Bubbler has been stolen. Water Bureau security believes that it was stolen between Thursday, Dec. 6th after 8 p.m. and before 6:30 a.m. Friday, Dec. 7. 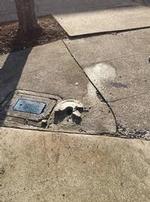 “Sidewalk renovation work sidewalk renovation on this corner and the fountain had been obscured by construction fencing,” explains Rich, a Water Bureau maintenance supervisor. “That work was completed recently but we received a call today from a neighbor asking why the fountain had been removed again.” A crew was dispatched to investigate and found that Bubbler missing.

The Water Bureau is working with nearby businesses to view exterior security footage to see if the culprit was captured on camera.

In the meantime, your help is needed to find and return the Bubbler.

In 1912, local philanthropist Simon Benson donated $10,000 to the City of Portland to install 20 bronze drinking fountains, now known as Benson Bubblers. Local lore suggests that Benson, who ran a lumber company, donated the downtown fountains to keep loggers out of the saloons at lunchtime. Others say that Benson was inspired after seeing a little girl crying at a Fourth of July parade because she could not find a drink of water. Either way, the Benson Bubblers have become an historical and enduring legacy in Portland.

There are now 126 bubblers, 74 single bowl bubblers and 52 multi-bowl/fountain bubblers. An online map of Benson Bubbler locations can be found at https://www.portlandoregon.gov/water/bensonbubbler.