Have you heard the tragic story of the missing Benson Bubbler? Last week, Portland Water Bureau security learned that the bubbler at SE 65th Ave. and Foster went missing, presumably stolen. The bubbler is a single-bowl style modeled after the “true” four-bowl Benson Bubblers found downtown.

Wait a Minute… Not All Bubblers Are “Real” Benson Bubblers?

True Benson Bubblers have four bowls on the fountain. While one-bowl style fountains are not “true” Benson Bubblers, their inspired style evoke the aesthetic of iconic Benson Bubblers designed by A.E. Doyle. In fact, in the 1970s the Benson family asked that the installation of the four-bowl fountains be limited so as not to diminish their uniqueness. 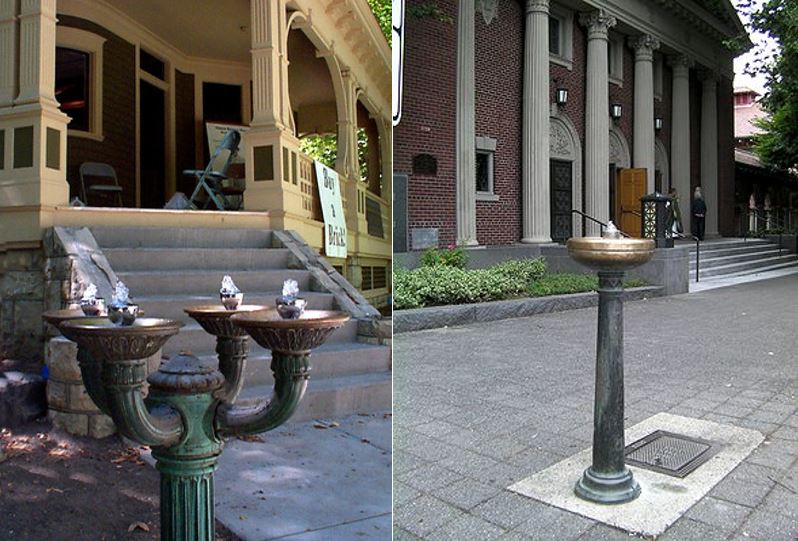 Left: A “true” four-bowl style Benson Bubbler. Right: A single-bowl fountain, not technically a Benson Bubbler, but often mistaken for the real deal.

Despite the non-Benson Bubbler status of the one-bowl drinking fountains, they are still a beloved fixture of many Portland neighborhoods. And the community members along SE Foster Road want their bubbler back!

Do you have any information that may help solve the case of the missing bubbler? Get in touch with Water Bureau security at 503-823-6084.

Use the map below to find your favorite bubbler—whether it's four-bowl or one bowl.