The pipes that carry water from the east to west side of the Willamette River are more than fifty years old and will probably not survive a major earthquake. This could leave Portland’s city core without reliable water for six months or more. The Willamette River Crossing Project will deliver water to the west side of the river, even after an earthquake. Investment in this project makes sure that we can fight fires and provide water to critical facilities like hospitals. The project is key to our region’s ability to recover economically after an earthquake.

The Portland Water Bureau has worked for the past several decades to increase the number of water supply facilities that can withstand earthquakes. Reservoirs at Kelly Butte and Powell Butte on the east side, and the future reservoir at Washington Park on the west side were all designed to meet current seismic standards. The Willamette River Crossing is the next step in strengthening our system to make it more earthquake-resistant, and critical for bringing water to the west side.

The project budget is $88 million. As part of the Water Bureau’s Capital Improvement Program, this project is funded by revenue bond proceeds paid back with the utility ratepayers’ fund.

Work schedules can change for many reasons including weather, traffic and problems with tools, machines or supplies. Sometimes we need to stop between different types of work and start again later.

Once construction starts, work hours are expected generally to be between 7 a.m. to 5 p.m., Monday through Saturday. However, some work will take place overnight between 6 p.m. and 6 a.m. We will coordinate overnight hours with affected property owners, businesses, tenants, and transportation agencies. Work schedules are subject to change to due contractor availability and weather.

Much of the work will take place in parking lots on the east and west side of the river, with some of the work taking place on surface streets on SE Stephens and SE Harrison between SE 7th and 10th Avenues.

The project has two distinct but overlapping phases: exploration/design and construction. For example, geotechnical exploration during the design phase provides information to inform design but also includes construction elements that will be used during the water main installation. During construction, the project design will be confirmed at each step and may be revised based on newly discovered conditions.

The project is currently in the exploration/design phase. Along with utility locates, site exploration and soil testing, this phase includes conducting a geotechnical probe which will provide essential information on how the geology beneath the river will impact the construction. Geotechnical probes directly push tools and sensors into the ground using hydraulically powered percussion — a bit like a jackhammer. Conducting the pilot bore – the geotechnical probe – will help us determine the best tools to use for the future pipeline, and the best path across the river. 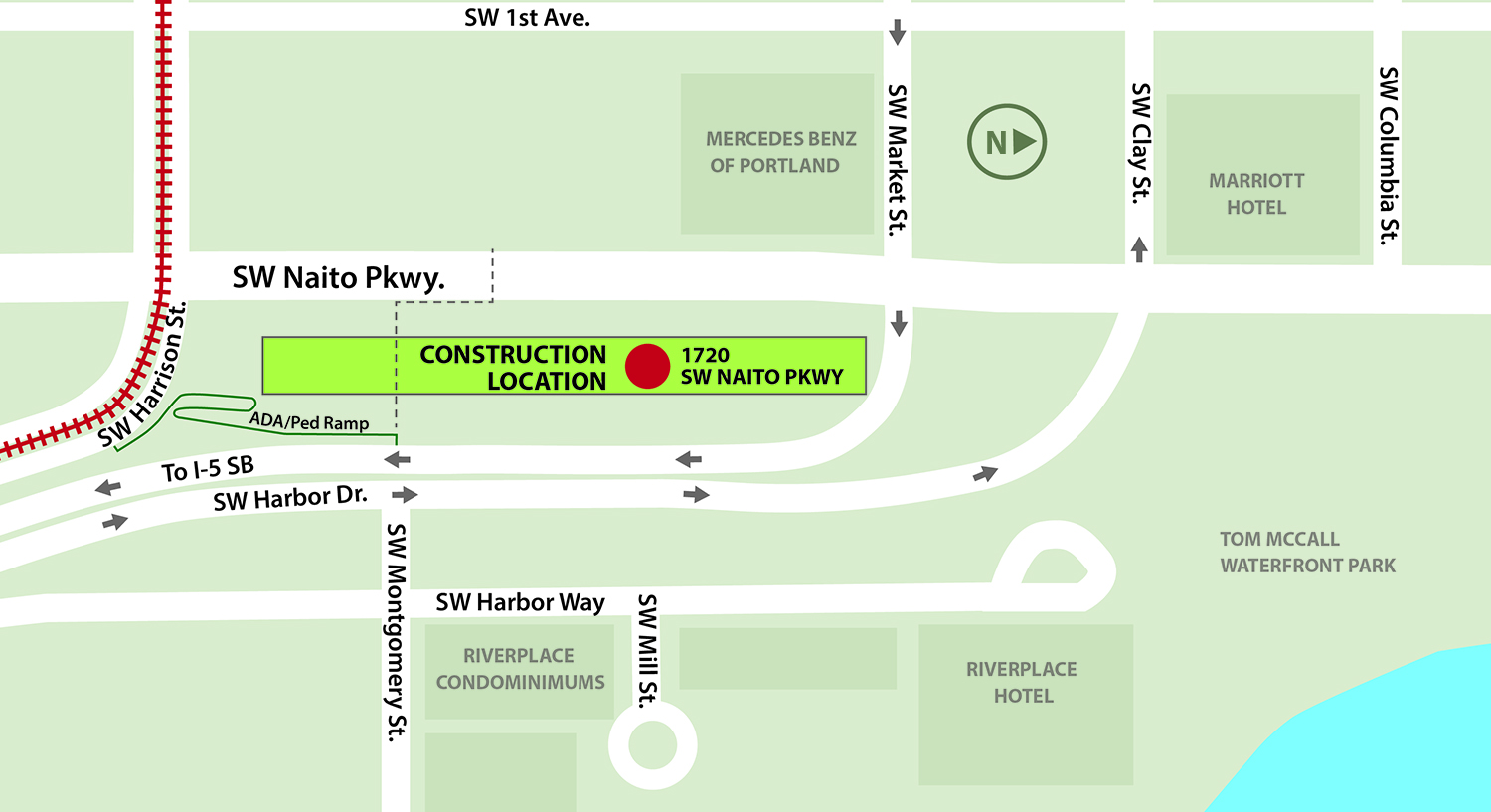 Public impacts: Traffic will be temporarily diverted as crews dig a trench in SW Naito Parkway between Market and Harrison Streets.

Caption: The geotechnical probe will follow the same path as the Horizontal Directional Drill.

Public impacts: The area will experience increased truck traffic as trucks remove soil from the shaft and the hole we dig as we build the microtunnel.

Public impacts: Trucks removing soil excavated by the HDD at Block J on the west side of the river may temporarily block traffic.